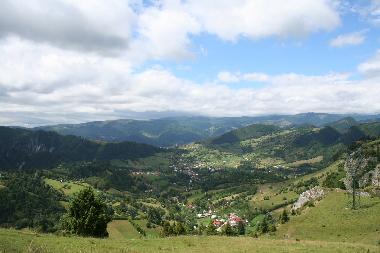 Other languages: Hungarian, Roma (Gypsy) and others.

National Flag: red, yellow and blue, in vertical bands, with blue next to the flagpole.

Capital: Bucharest (1.9 million inhabitans as of 2009), situated in the south–east of the country, on the Wallachian Plain, on the banks of the Dambovita and Colentina rivers; first attested in 1459.

National currency: Leu or RON. 1 leu= 100 bani. Bills in circulation: 1, 5, 10, 50, 100 and 500 lei. Coins in circulation: 1, 5, 10 and 50 bani. Currency exchange: at banks and at currency exchange offices, which can be found in hotels, airports and train stations and on main urban thoroughfares. It is advisable not to exchange money on the black market, in order to avoid being cheated. Credit cards: large hotels, restaurants and supermarkets usually accept American Express, MasterCard, Diner’s Club and Visa. Payments by credit card are becoming more widespread.

Emergency telephones: 112 (for emergency services anywhere within the country).