Topics include Things to Do, Dining Scene & more!

United States of America has a history of unified etiquette protocols that may not seem obvious to foreigners. Millions of American families have etiquette books in their library. If you are traveling to the United States on business or for a lengthy stay, you might want to consider consulting Emily Post's Etiquette (first published in 1922 and now in its 18th edition) or Amy Vanderbilt's Etiquette (first published in 1952). Emily Post's name has become synonymous with proper decorum in the States, and remains so even today. Any modern book on etiquette published in the States will cite either of these two historical figures. For more modern situations, you may consult the Emily Post Institute, which will help clear up any confusion on how to best represent yourself in America.

Things NOT To Forget:

Tipping: Restaurant and bar menus indicate prices without sales taxes (which varies by city/county) and tips (15 to 20%), so everything you will order on the menu will end up costing about 21% to 26% more. The sales tax will always be included on the 'check' (bill); the tip is rarely included unless you are dining with a group of 6 or more people -- in this case, many establishments automatically add a tip or 'service charge' or 'gratuity' of between 15% and 20%.  Such practices are ordinarily mentioned on the menu.  'Suggested tips' might be mentioned on the bill to aid you in calculating the amount you want to tip.  If the tip is not included on the menu, don't forget to add it. Waiters' and waitresses' salaries are small so they depend on tips.  If you posses an iPhone or Blackberry, there are applications that calculate tips (many smartphones also include a calculator, which comes in handy.) Since sales tax is often around 9%, an easy way to calculate a tip is to look for the sales tax amount on the check and double it; if it's 9% and you double it, you'll get a figure that is 18% of the 'food/drink' amount.  You can provide the tip to the server in one of 2 ways:

Be aware that there are different type of restaurants that have different 'tipping protocols'.  In general, one does not tip at a 'fast food restaurant'.  These restaurants (like McDonald's) have a counter where you order your food and where you pick it up.  As there is no server, no tip is required.  Sometimes, there's a jar on the counter with a sign with the word "tips' on it which is a request for tips which will be split amongst all of the clerks at the end of the shift.  If you have some spare coins in your pocket or from your change that you receive from your food purchase, you may toss these in the can but it's not necessarily expected.

In some less expensive 'sit down' (not 'fast food') restaurants where there is an actual server, you might be expected to pay the cashier near the door of the establishment as you are leaving.  In such a case, you'll receive a check from the server but you will take the check to the cashier and you'll pay the cashier.  ORDINARILY, the server will signal to you where you are to pay your bill in one of a few ways:

Tipping is also common in the service and hospitality industry, from valet to housekeepers at your hotel.  $2-$3 tips for valet each time you retrieve your car (none when you give it to the valet) are common.  $2 per day for the housekeeper at your hotel, left in the room at the end of your stay is common.  A note that says "Thank you" along with the money makes it understood to be a tip rather than money left behind by mistake.

Alcohol Laws. American alcohol laws are a patchwork of rules that vary by state, county, and towns. In some places (primarily in the South), entire counties or towns may prohibit alcohol. In all states, however, the drinking age is set at 21 for both sexes and is fairly well enforced with ID checks by the alcohol seller. Furthermore, it is illegal in most states to provide a minor with alcohol even in the company of his parents.  Drinking in public is usually a civil offense in most communities, though many towns and beaches permit alcohol consumption in public (and it is often relaxed a little during public holidays, like the 4th of July: no policeman is going to hunt you down for brandishing a bottle of beer in time to the marching band's music at an Independence Day Jamboree or sitting on the beach in August enjoying a glass of wine at a picnic.) Driving under the influence is very much illegal and could net you a large fine and possibly jail time.

Illicit drugs  Drugs have similar risks to alcohol  but can have significantly more severe consequences: the more addictive or hallucinogenic, generally, the worse the consequences shall be. American prisons have a disproportionate amount of men incarcerated for involvement in the sale and distribution of drugs: purchasing such items aggravates the problem and encourages more violent crimes like murder. (Recently, the Obama Administration has increased attention to the trouble it causes over the border in Mexico: drug cartels often are intertwined with gang activities in the larger cities of both the U.S. and Mexico and many have already died violent deaths over smuggled drugs like cocaine, marijuana, and heroin.) In the long run, it really isn't worth it if it can cost another man his freedom or his life.

Pets: Bringing a dog  or cat with you to America is permitted, provided they go through quarantine.  The general rules for having a dog with you in America are that it should be recently vaccinated against rabies prior to arrival and that it can behave itself in public;vaccination for canine distemper is also a plus for dogs. Generally, dogs must be kept on a lead in public and cleaned up after in major cities. They should also have a tag on their collar with your name, full home address,  and phone number on them: it is a quick way to identify them if they are lost. They are generally not permitted in stores or on public transportation unless they are service animals (such as guide dogs or such), but smaller ones are allowed if they are kept in a pet carrier.  Dogs are allowed in nearly all parks (including national parks) and many city parks in fact have special areas for them to run and play with other dogs in.  Not all hotels permit pets in them, so ask your travel agent or a hotel chain about which hotels allow pets in them.  There may be additional charges or deposits for having pets in your room.  Additionally, pets are not to be left alone in the room and if they cause disturbances you and your pet may be asked to leave the hotel.  Any repairs needed due to damages done by the pet will be charged to your credit card. Dogs and cats are revered as pets in the USA. Americans are repulsed by the idea of any discussion of eating their pets. It is also ideal to microchip pet dogs with your contact information in case your dog gets lost. The microchip and the name tag are critical if picked up by the local authorities who might be a shelter that will euthanize dogs that are not adopted or claimed within a short period of time.

Sexuality: The age of majority in America is 18 years nationwide for both sexes.  Those caught soliciting a minor may face time in jail and there are no exceptions to this rule: statutory rape is a serious crime the law enforces rigorously and embassies may be in a position to do very little to assist you if you are arrested aside from helping to hire a lawyer. Prostitution is also illegal although occasionally found in areas of ill repute, those caught soliciting a prostitute may face similar penalties and problems. (The prostitutes themselves also get punished with up to several years in jail themselves.)

Police:  Police officers on foot and on horseback are a very common sight in American cities; New York City, Los Angeles, Chicago, Houston, Philadelphia, Miami, and San Francisco have highly trained professionals. They deal with everything, from stopping a Los Angeles city bus for stopping violations to much worse and more dangerous situations, like the aftermath of Hurricane Sandy or the Boston Bombing of 2013. Generally speaking a visitor will see these men and women both on and off duty, and one of their key jobs is keeping the peace during festivals like the Fourth of July or for parades; they also patrol the beat on weekends near bars to make sure order is kept around alcohol.  Unlike many countries, American police often wear guns, and are trained to use them. However, unlike the movies, they do not typically use them unless they absolutely have to do it, like in cases of armed robbery, assault, rape, or other violent crimes, and though that Smith and Wesson looks frightening to a visitor, it is unlikely the cop wearing it is going to use it unless he thinks you might be a member of an international crime syndicate. That being said, one should always treat the policeman with respect, and call him or her "officer".  The policeman can be quite helpful in sorting out where to go if you are lost and can be a great asset if you feel a business is trying to scam you, but he will not help you if you never ask nor if you treat him as a paid grunt, with no respect. That being said, never attempt to touch the gun on his hip and do not ever attempt to bribe him, since the first is a very dangerous move and the second is a serious crime -you will be arrested for this and brought in front of a judge, with a very heavy penalty.

A Day at the Seaside, Waterpark, or Swimming Pool

As in many places all over the world, fun in the sun is a perfectly acceptable and beloved pastime for people of all ages: most Americans would consider it a total waste not to utilize the nearly 20 thousand km of coastline or hundreds of swimming pools available during summer: Florida and the Los Angeles area alone have all three, for example. There are a few things to remember, however:

At the Dinner Table

Common  gestures that are obscene and should be avoided: 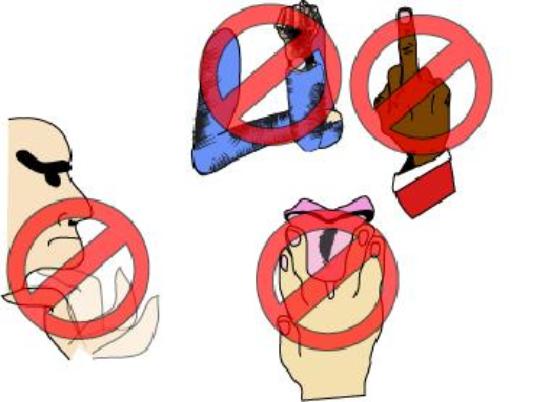 Also it should be noted it is not acceptable to refer to cigarettes as "fags" as this is an incredibly offensive term for a homosexual man and may result in bodily harm.
Share your knowledge