An undiscovered corner of mainland Greece

Have you ever wondered where else you could explore in Greece once you’ve seen a few of the islands, maybe parts of the Peleponnese, Chalkidiki or the Pelion?  If you fancy getting to know an area of the mainland scarcely touched by foreign tourism but quite popular with Greeks, why not head for the western part of Magnesia in Thessaly?

Magnesia forms part of Thessaly and is located on the east coast of Greece, roughly half way between Athens and Thessaloniki, with the city of Volos at its centre. The province includes the Pelion peninsula, which is quite touristy, and also the much less touristy western side of the Pagasitic Gulf, to the south of Volos.  This western side is an area which includes dramatic mountain landscapes, picturesque seaside villages and typically Greek hillside settlements.  Throw in multiple archaeological sites, a monastery and the bustling but manageable city of Volos and you have an excellent recipe for a holiday.

It may not be as popular as Athens or have as many parties as Mykonos, but Western Magnesia definitely has a lot to offer the discerning traveller. Its great natural features and heritage sites make it a truly underrated holiday destination.

Amaliapolis is situated on a large bay with an island with a little whitewashed church just off-shore.  It has a gently sloping sandy beach, very suitable for children, a couple of beach bars, several tavernas with good fresh fish, food shops and cafes. The village is built on a hillside and on summer evenings the seafront road is closed to traffic to allow for the evening promenade and waiters from the tavernas to cross safely to the tables next to the sea.  It is popular with holidaying Greek families and Athenians who come for the weekend. There are a couple of hotels as well as apartments and rooms to rent. Amaliapolis makes a good base to stay at in this area and is easily accessible from the E75, the main Athens/Thessaloniki motorway. 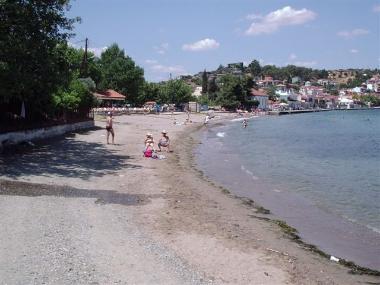 Nies, a little further south (47 km from Volos, to be precise), offers a spectacular panoramic view as you travel across the hills from Sourpi and a long narrow beach, again with shallow water extending far out into the bay.  There is just a beach bar here and a few houses but it is an extremely beautiful spot – go now before the proposed golf hotel complex is built!  The local population is a very wanderer-friendly 300 now, but bound to get packed with tourists from the proposed hotel. 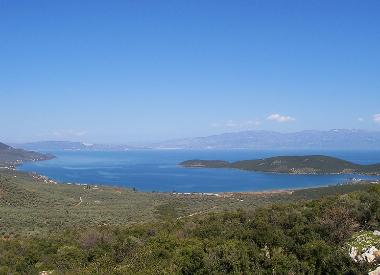 Pigadi is a small fishing harbour with some good tavernas and cafes.  There is a lovely sandy beach a few minutes’ drive from the harbour, which is again gently sloping and very safe.  There are a couple of cafes/bars, one of which has a swimming pool which you can use for the price of a soft drink. 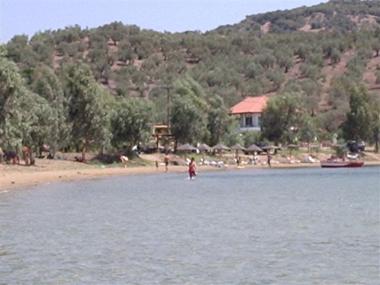 Agia Marina and Lefki also have a sandy beach but here for some reason the sea is sometimes rougher and there are larger waves.  Again a beautiful spot with a couple of cafes/tavernas and a small hotel or two.

Achillion is a larger village with a long seafront with many tavernas and bars, food shops and places to stay.  Although there is a small sandy area you can swim from, most visitors might prefer to drive along the coast to find better places to swim.  From about May onwards there are daily boat excursions from here to the island of Skiathos, which is renowned for its sandy beaches (and hordes of tourists!)

Nea Anchialos is a large village further north towards Volos with a long shingle beach and extensive archaeological remains. Beaches are full of the unique reddish sand recommended by locals as great fro sand-baths to cure rheumatism. Small bays and ports along the 20-km stretch of coast offer clear water, great for swimming, fishing and watersports. The sea shelves quite steeply downwards off the beach, so non-swimmers need to take care.  Nea Anchialos also boasts several beach side restaurants and also Greek fast-food outlets, which sell ‘tiropita’ (cheese-pies), spinakopita (spinach pies) and sausage rolls, all of which are very good.  There are various hotels and places to stay. 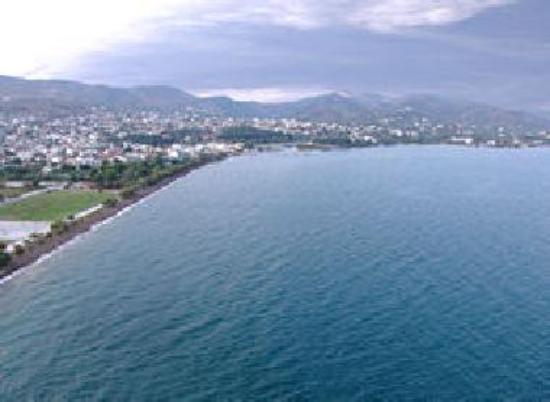 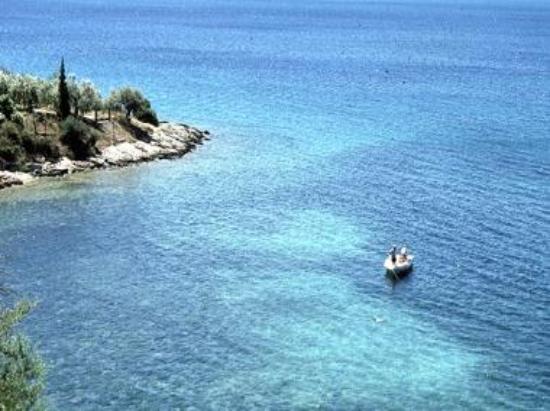 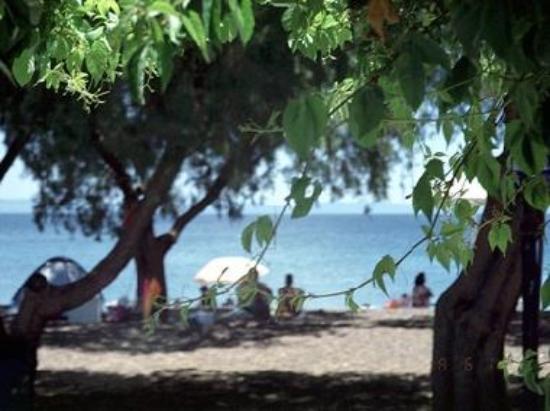 After Volos, the largest village of the area is probably Almyros.  It is a workaday place with some charm, bustling cafes, supermarkets, banks etc and a large shady ‘park’ with a nice café. It also has public tennis courts. Buses from Athens stop here to connect with local bus routes and there are always plenty of taxis in the main square.  There is also a small but excellent archaeological museum which has many exhibits form the excavations at nearby Alos (or Halos) – well worth a visit.

The mountain villages of Portaria and Makrinitsa to the north of Volos have a spectacular location, perched steeply on an escarpment around 2,500ft. above the valley with wonderful views over Volos and out to the Pagasitic Gulf. Portaria boasts a thirteenth (?) century church of Panagia with beautiful frescoes.  In the nearby village of Anakasia there is a Museum which features the work of Theophilos , (1878?-1934), an artist of the primitive/naïve school who painted in and around Volos and some of his frescoes can be found in one of the churches in Makrinitsa.

At Kokkoti, near Almyros, one can visit the Monastery of the Virgin Xenia (Ano Moni Panagias Xenias) where the Church is decorated with frescoes dating form the 17th century.

Volos, the main town of the province of Magnesia, is a busy, thriving city with a wide selection of shops, restaurants etc.   It is best to park near the harbour as the main shopping streets run parallel with the sea front. There is a wide promenade beyond the harbour called the Argonaufton, lined with cafes and restaurants. The first street in parallel with the seafront is called Iasonas, it has many banks etc, and the second street in is called Demetriades.   Both of these are one way.   The third parallel street is entirely pedestrianised and has many shops selling clothes, leather goods etc and is called Ermou.   This street starts with cheap and cheerful shops at the end nearest the harbour and then goes more up-market!   There are also many shops in the intersecting streets between these three roads.

Volos has a tourist information office opposite the KTEL bus station (you may spot it on your way into the town) and there is an excellent archaeological museum. The steam railway, which goes from Ano Lehonia near Volos to the village of Milies on the Pelion peninsula, runs at the weekend.   Volos’ speciality is Tsipouro (an ouzo type drink) and there are many bars where you can sample this with delicious mezedes – the Greek version of tapas.

Two major Neolithic sites, Sesklo and Dimini are to be found near Volos.   Adjacent to the Neolithic site at Dimini is the Myceneaen settlement of Iolkos which is still being excavated and includes two Mycenaean tholoi tombs, one of which can be visited.

Another multi-period site is to be found at Demetrias , again quite close to Volos.   This site ranges in date from the Neolithic period to the early Christian era, being finally abandoned, it is thought, in the 7 th century AD.

Nea Anchialos is the site of the extensive archaeological remains of Fthiotic Thebes which dates from the late Roman to early Christian period.

Near to Almyros is the site of Hellenistic Alos.  Remains of the town walls can be seen and finds from the site are displayed in the Almyros museum. It is calculated that the town had 1400 houses and 9,000 citizens but it was destroyed by an earthquake in 265 BC.

Velestino is the modern name for the ancient Hellenic city of Pherai, one of the most important in Thessaly.  It was occupied from the Final Neolithic period (circa 3,000 BC) to the beginning of the Roman period (1st century AD).  The modern settlement, Velestino, was founded in the 13th century and was the birthplace of Regas Pheraios, the pioneer of the  Hellenic revolution against the Turks in 1821.