All Season’s D’Fort Ayurvedic Resort
Lowest prices for your stay
Lock in the lowest price from these sites
US$ 58
Free cancellation until 21/05/21
View deal
PricelineUS$ 58
eDreamsUS$ 58
Agoda.comUS$ 58
TripadvisorUS$ 58
Trip.com
Expedia.com
View all 14 deals
Prices are provided by our partners, and reflect average nightly room rates, including taxes and fees that are fixed, known to our partners, and due at time of booking. Other miscellaneous taxes and hotel fees which are not fixed or due at time of booking may be payable at the property at time of stay. Please see our partners for more details.
mohammedshafi2019
Jeddah, Saudi Arabia
6618

This is one of the best properties in Kollam, the location is excellent, very close to old light house constructed during British period. The rooms are very spacious and international standards. It is value for money.

Trip type: Travelled with friends
See all 66 reviews
Nearby Hotels 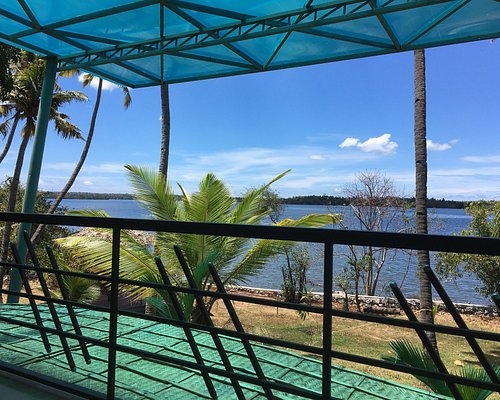 Hotels.com
View deal
Orbitz.com
Agoda.com
US$ 22
Booking.com
US$ 28
View all 12 deals from US$ 22
354 reviews
3.1 km from All Season’s D’Fort Ayurvedic Resort
We compared the lowest prices from 12 websites

Expedia.com
View deal
Hotels.com
FindHotel
US$ 52
eDreams
View all 14 deals from US$ 52
435 reviews
2.8 km from All Season’s D’Fort Ayurvedic Resort
We compared the lowest prices from 14 websites
All Inclusive
Fragrant Nature Backwater Resort & Ayurveda Spa
US$ 69

My name is Vivek Nair.

And was very rudely asked to check out by 2pm (12th Jan 2020). I had requested atleast to give me 2 hrs extension considering that i had cheked in late but was denied very rudely from the customer desk team.

Also I came to know from friend that they had already done the advance booking but , even without checking anything internally I was asked to pay all the entire amount again.

Now I am waiting for the hotel to reverse the payment i did. Hope to get it soon

dear sir
we had already informed you about the cancellation policy of our hotel . there is no refund from one day prior to check in. you had booked and blocked our room and didn't show up. we couldn't sell that room. you also did't inform us in advance . that why we had to charge.

Report response as inappropriateThank you. We appreciate your input.
This response is the subjective opinion of the management representative and not of TripAdvisor LLC
Ninan J
Aluva, India
123
Reviewed 8 January 2020
A cozy place near the sea

Thangasseri or Tangy as it was earlier known among the local English speaking population is a small hamlet famous for its schools and the Anglo-Indian culture. Now that most of the Anglo Indians have migrated to other countries, the place has has been spruced up for tourists with the lighthouse as the main attraction, not to mention the remnants of the old fort, the sea-facing front of which is now landscaped for those who want to hang out for leisure. Besides, there is also a fishing harbour that has come up displacing a number of families which appear to have been re-settled around the lighthouse in the place where there was once a coconut grove and a graveyard of the Dutch, Portuguese and British. I say, this because I was visiting this place after 50 years of passing out the Infant Jesus AI School. There never was a hotel in this area then nor was it a tourist spot, though there were inquisitive visitors once in a while just to peep into the culture of this secluded hamlet. The building appears to be an old bungalow that has been converted into a hotel. The rooms are neat and spacious with modern amenities. A good three-star facility, though the price seems a bit high.

Review about lack of interest on following up on enquiries , was looking for reserving 13 rooms for 11th Jan 2020 but the person answered my call said he need to check with the concerned mgr.but he was in a meeting . And he promised to call back which never happened . Had to book somewhere else . Need more attention in managing reservation .

Sorry for the inconveniences caused due the lack of communication. We respect your valuable feedback and definitely be more careful.

Report response as inappropriateThank you. We appreciate your input.
This response is the subjective opinion of the management representative and not of TripAdvisor LLC
Dashjas
1
Reviewed 28 December 2019
Very bad customer service

We stayed in hotel for just one night on 26th Dec and checked out on 27th dec. We arrived at 2.30 p.m and had two premium double rooms booked but one of the rooms key was not working. Staff didnt have the courtesy to even take our luggage and one of the room given was smelling very badly of smoke. We had specifically mentioned to give a non smoking room but they gave a smoking zone room. Even the room they told to change was also no different.With a small infant of 4 yrs we (myself and my sister)somehow stayed and our parents stayed in other room. Staff kept us waiting for 20 to 30 min to get new keys. Inspite of us asking to shift us to a different room, they were least bothered and didnt even apologize for the inconvenience caused.(we went out to do sight seeing and after 2 hrs when we returned were still made to wait for 10 min for new keys)
We got to know that all rooms are same and there is no different smoking and non smoking zone rooms. So my sincere advice is if you are a non smoker dont even plan to go there as you will end up staying in smelly room which you will not be able to tolerate. Staff didnt even put any air freshener. Even though we were localities, they treated us badly and were seen treating foreigners and northis with due respect.
Worst experience till date.

We regret the inconveniences caused during your stay.

Report response as inappropriateThank you. We appreciate your input.
This response is the subjective opinion of the management representative and not of TripAdvisor LLC
Qbicblack
1
Reviewed 23 December 2019
Family Trip

Its a good place for family, friends and couples etc

Its near to kollam beach easy to move town .

Thank you for spending time to update your review on our hotel, It was an absolute privilege to have you with us. We appreciate your patronage and sincerely look forward to the pleasure of having you stay with us again.

Report response as inappropriateThank you. We appreciate your input.
This response is the subjective opinion of the management representative and not of TripAdvisor LLC
View more reviews
PreviousNext
12…11