Lovely from top to bottom

Denzel was warm and welcoming at check-in. The lobby and bars were stylish and the hotel scent is terrific. Our room was perfect--it seemed like every detail was covered. Comfortable bed and luxe pillows. Dinner in Khora was superb. Amazing that we can bring our dog into such a nice place. All the staff we encountered were helpful, including the doormen, and we can't wait to come back!More

Thank you so much for leaving us a review!! We will let Denzel know he was mentioned by name and we will share your feedback with our staff! Hopefully, your travels bring you back to our area!!!

Report response as inappropriateThank you. We appreciate your input.
This response is the subjective opinion of the management representative and not of TripAdvisor LLC
See all 24 reviews
Nearby Hotels 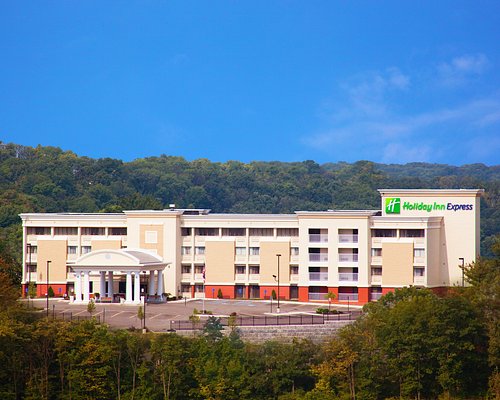 Loved my room with a super comfy bed. The hotel is located in great location. You can walk to lots of great restaurants and bars for a night cap. Staff is super friendly and helpful. Only thing missing is in room coffee, but there is a Café in the lobby that serves coffee.

Room tip: get the room with king bed. some of the queen bed rooms don't have a full length mirror.
Ask deidra73 about Kinley, Cincinnati Downtown, A Tribute Portfolio Hotel
1  Thank deidra73

Aww thank you so much for leaving us such a positive review!!! We can not wait to welcome you at check in!!

Report response as inappropriateThank you. We appreciate your input.
This response is the subjective opinion of the management representative and not of TripAdvisor LLC
PorrugueseMan-a-War
Central Florida, Florida
2
Reviewed 18 October 2021 via mobile
Weekend Knights

Came up for a getaway to watch a game. The football was disappointing but the hotel we stayed in was awesome! At checkin, Tenesha and Denzel were very helpful, very professional and very engaging: perfect start to the weekend! Entire staff was great! Great place, walking distance to food and stadiums.

Thank you for taking the time to give us a review!!! I will let Denzel know that we gave great service!!! We can not wait to welcome you again at check in!!!

Report response as inappropriateThank you. We appreciate your input.
This response is the subjective opinion of the management representative and not of TripAdvisor LLC
bus_traveler_c
Cincinnati, Ohio
20587
Reviewed 20 September 2021
Nice stay downtown

Spent one night at the Kinley and was very happy with the hotel. Yes, the rooms are a little small as a couple of reviews noted but the staff was super friendly, the rooms are updated, and the location is convenient to downtown, Over the Rhine, ballparks, etc. We didn't eat at the restaurant but had some drinks at the bar where the bartender was very nice and the prices were pretty reasonable for a hotel bar. Overall, a nice stay.

Thank you so much for providing your detailed feedback!!! We hope to see you again!!!

Report response as inappropriateThank you. We appreciate your input.
This response is the subjective opinion of the management representative and not of TripAdvisor LLC
angelagR6567OI
1
Reviewed 7 September 2021
Friendly but not accommodating

We really wanted to enjoy our stay. We were in from out of state for a Friday wedding. Being a member of the bridal party, I booked Thursday-Saturday night, to allow us a day after the wedding to enjoy the city and catch a Reds game. When booking, all rooms had the same rate. Given our 5 hour drive in from out of down and concern for rush hour traffic, we opted to go straight to the rehearsal and dinner Thursday evening rather than checking in first. When we did check in around 9 PM, we were informed that there had been a mix up with the welcome bags left for us, and they did not have one for us. The one visible behind the desk was "for someone who had already checked in." We didn't make a big deal about this, because mistakes happen.
We then proceeded to head to our small yet well designed room, which was just large enough for a king size bed, two nightstands, and a bench at the foot of the bed. The only other furniture in the room was a small minifridge/narrow closet attached and TV attached to the wall. As we went to retrieve the complimentary bottled waters from the fridge, we found one of them was open and half gone. We were told this was a housekeeping oversight and offered replacements. In the mean time, we had noticed the floorpan on the fire escape route diagram on the back of the door, that clearly showed our room (308) being at the end of the hallway, was was considerably smaller most others on the floor.
The next day, my fiancé set up his laptop on a nightstand and sat on the edge of the bed to work since there was no desk or even chair in the room. Our suspicions were confirmed when I saw a friend's room that was considerably larger and contained a decent size desk. We certainly understood not all rooms were alike, but we had booked at the same time, through the same website, and paid the same nightly rate. The only difference was I was staying three nights instead of only 2 nights.
We did bring up our disappointment during checkout, and received a verbal apology and an explanation that they do not pre-block rooms, and so because we had checked in later Thursday evening, that was the room available to us. We also asked about the welcome bag still sitting behind the counter, which in fact did have our names on it. So, three days later, we finally received the welcome bag intended for us after initially being told it was for "someone else."
Obviously we understand the physical space in the hotel may not allow every room to be the same. The hotel offers variety of room types based on bed size, even including bunk beds. However, if a room is not similar in size and furnishing/amenities, I don't think the rate your be equivalent to larger, better furnished rooms. I certainly don't think it is fair to penalize guests who check in later, especially if they have traveled and are staying multiple extra nights. While the staff were pleasant and helpful and the location convenient, we cannot recommend this hotel. There is no way to know what you are getting for your money until you arrive, and hopefully you can arrive early because that is the way they determine quality of your room.

Room tip: check in early as this is the only way to avoid smaller room assignments
Ask angelagR6567OI about Kinley, Cincinnati Downtown, A Tribute Portfolio Hotel
Thank angelagR6567OI

Thank you for letting us know! We have shared this with our hotel team and hopefully you will come back for a more memorable experience!

Report response as inappropriateThank you. We appreciate your input.
This response is the subjective opinion of the management representative and not of TripAdvisor LLC
Guhor1966
Morganton, North Carolina
631204
Reviewed 23 August 2021
Up and coming - we hope

Another newish property type by Marriott. Like some AC's, it was desperately trying to be avant garde. The room, although spacious was everything from Chip and Joanna Gaines to mid-century to upscale chic. Very confusing, and in my opinion, ugly. The sliding barn door to the bathroom must have weighted 250 pounds ! Terrible to open An older senior citizen would have a real hard time opening it. There was no grab bar in the cavernous shower. Font desk was very helpful and courteous. However, the doorman/valet didn't know a rather important restaurant located two and a half blocks away. He gave us bogus information and we spent an additional 20 minutes walking. Although great exercise, we would have rather gotten to our restaurant on time. Oh, and $37 parking fee ......... ouch.

Thank you for choosing us to meet the needs of your stay! Despite the shortcomings, we appreciate you mentioning the friendliness of our staff! We have been working on improving our staff knowledge about local restaurants.

Report response as inappropriateThank you. We appreciate your input.
This response is the subjective opinion of the management representative and not of TripAdvisor LLC
View more reviews
PreviousNext
1…34