Apa Kabar Villas
Apa Kabar Villas
Lowest prices for your stay
Lock in the lowest price from these sites
$76
$68
View deal
Priceline$76
Agoda.com$68
FindHotel$68
eDreams$68
Etrip$68
StayForLong
View all 10 deals
Prices above are provided by partners for one room, with variable occupancy rules as provided by the property, and do not include all taxes and fees. Please see our partners for full details.
bsaikat
Kolkata (Calcutta), India
3025

Stayed there for 2 nights with 3 villas (3 familie). Overall thoroughly enjoyed the stay. Nice place to seat back and relax. Rooms were specious though some of the rooms & facilities needs renovation. Staffs are super friendly. Special thanks for Yogi for supporting us with the medical emergency.

Trip type: Travelled with family
See all 217 reviews
Nearby Hotels 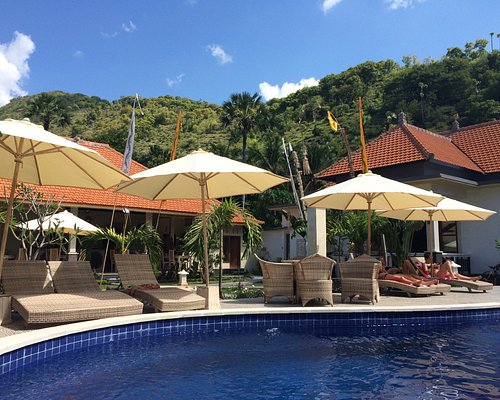 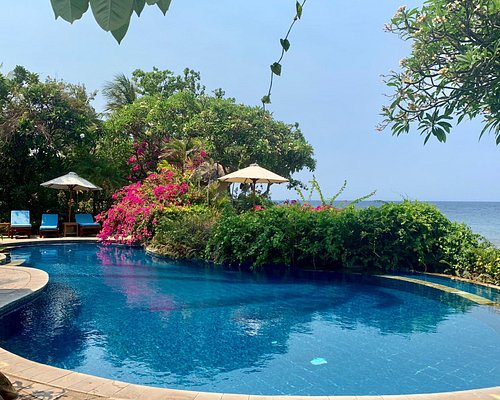 Recently stayed here with my family, we had 3 cottage sea view rooms. We have stayed in Amed many times now, at various hotels, and this has to be one of the best location we have found. Literally right on the beach, without gorgeous ocean views and great snorkeling right out the front. So many fish and great coral, highly recommended. The staff are friendly and helpful, the food in the little restaurant is ok, and the rooms are comfortable. The Cottage rooms have an upstairs mezzaine level with 2 small beds, great for children of a slightly older age as the stairs are too steep for small children. There is a good coffee shop and a couple of good little restaurants within about 100m of the hotel. Overall, a very relaxing stay and we will certainly be coming back again soon.

This review is the subjective opinion of a Tripadvisor member and not of TripAdvisor LLC.
adrianprocter
London, United Kingdom
922
Reviewed 6 September 2019
A little piece of heaven in beautiful Amed

We stayed here for the second year running in August as we find it to so peaceful tranquil and relaxing I don’t think we would want to stay anywhere else.

As always the staff were wonderful and in particular a big thanks to Yogi the Manager who is always so friendly and helpful always going out of his way to make sure that we are well catered for.The beach directly at the front is black pebbles dotted with little fishing boats everywhere and so just a stone’s throw to the sea itself which has some pretty good snorkelling and some nice coral.

Accommodation was excellent food was good and will be returning again in the near future.

Thanks again Yogi and hope to see you soon.

This review is the subjective opinion of a Tripadvisor member and not of TripAdvisor LLC.
462spencerh
42
Reviewed 26 September 2018 via mobile
Great Sea View

My wife and I stayed here for our honeymoon. The location of Apa Kabar was our favorite on the island. It is off the beaten path and surrounded with coral gardens, delicious restaurants, and water activities. We had a great time here and want to come again. I would definitely recommend coming here.

This review is the subjective opinion of a Tripadvisor member and not of TripAdvisor LLC.
Me7roiD
Sofia, Bulgaria
11569
Reviewed 21 September 2018
A tired place in dire need of some TLC

Located in the outskirts of Amed, Apa Kabar has a gorgeous beach outside that is absolutely perfect for snorkelling. Unfortunately, currently that's about all the place has going for it - in all honesty though, that's still quite a lot. As a semi-enclosed resort, the place looks like it must have been a nice and really well thought out beachfront complex at some point in the past, with a nice garden and pool and really pretty villas - before the current neglect turned it into a bit of a disappointment.

A prolongued period of neglect has taken its toll on the place - villas are missing tiles here and there, not to mention bulbs. Amenities such as the outdoor bathroom look really great but are once again let down by lack of maintenance: I guess good water drainage in the bath can sometimes be hard to achieve, but we could have at least used a towel hook in the bathroom - the last one had broken off some time ago and staff obviously had not bothered to replace it.

Breakfast is meagre and products are definitely subpar - if you enjoy tasty fruit, keep off the fruit salad. Having a good sleep can be a bit of a challenge - the windows at our villa would not seal shut so we generally felt as though we were sleeping in a tent. Villas 9 and 10 have their back towards the main Amed road, with scooters zipping by until late in the evening - make sure you avoid those.

The worst part is the rates they charge at Apa Kabar - had this place been (a lot) cheaper, I guess the lack of proper maintenance would not have been such an issue. When comparing it with accommodation elsewhere across Bali though, this did feel like a ripoff. Accommodation in Amed seems to generally be on the expensive side due to the influx of European tourists, but that is no excuse for the lack of attention to maintenance & general upkeep here.

This review is the subjective opinion of a Tripadvisor member and not of TripAdvisor LLC.
woodydog666
portsmouth
16698
Reviewed 6 September 2018
accommodating with a late booking, friendly staff

We switched from another place which wasn't up to much.

We had a family villa, and the location was perfect.

Snorkelling was ok off the beach, breakfast was good for both quality and quantity. Yogi who was looking after us was a good laugh, informative and good at organising things....

We would go again