Ok minus splitting my head open - Review of McMinnville Inn

McMinnville Inn
McMinnville Inn
Lowest prices for your stay
Lock in the lowest price from these sites
$83
Free cancellation until 28/05/22
Reserve now, pay at stay
View deal
Expedia.com$83
Priceline$83
Hotels.com$83
Travelocity$83
FindHotel$83
Agoda.com$83
View all 14 deals
Prices are provided by our partners, and reflect average nightly room rates, including taxes and fees that are fixed, known to our partners, and due at time of booking. Other miscellaneous taxes and hotel fees which are not fixed or due at time of booking may be payable at the property at time of stay. Please see our partners for more details.
3kids2kauai
San Luis Obispo, California
9074

Ok minus splitting my head open

It’s pretty clean (dust on the hangers though). I like that they use the mounted shampoo, soap etc. Maybe have a nightlight in the bathroom area. My husband got up in the middle of the night to use the restroom and the very poorly placed shelf/clothing rack met his forehead in the dark. Pretty good gash and bruise followed. See photos.
Rooms were big big but furniture dated.
OK for a last minute stay over but I will look somewhere else next visit.More

First of all, thank you for your recent stay with us. We would like to apologize for the mishap that was caused due to the clothing rack. I hope your husband is doing OK now. To show our appreciation and the inconvenience, your next visit we will comp a room of your choice. Once again, we do apologize.

Report response as inappropriateThank you. We appreciate your input.
This response is the subjective opinion of the management representative and not of TripAdvisor LLC
See all 156 reviews
Nearby Hotels 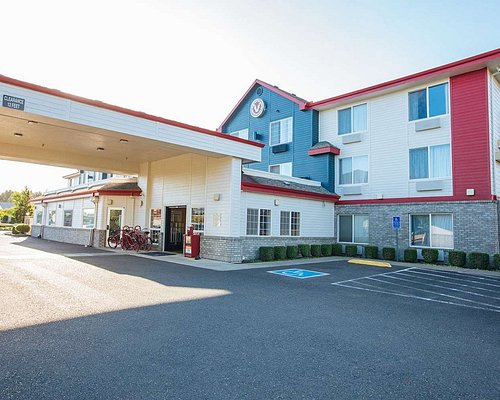 Located right on Hwy 99, it’s convenient in location. The rooms were clean, had two luggage racks, which is unusual and a complimentary breakfast. The beds and pillows were quite hard and the sirens during the night on the highway behind us, quite loud, as was the neighbor’s shower at 5:45am.
The host in reception welcomed our large group of car enthusiasts and even let us have a social gathering in the lobby before we all went to dinner, a nice young man.
Fine for the cost paid.

Trip type: Travelled as a couple
Ask Kristin A about McMinnville Inn
Thank Kristin A

Report response as inappropriateThank you. We appreciate your input.
This response is the subjective opinion of the management representative and not of TripAdvisor LLC
MeCha72
Roseburg, Oregon
335
Reviewed 22 September 2019 via mobile
Pleasantly surpised

The room was larger than expected, the beds firm -- which I liked but my 73 yr old father and 10 yr old kiddo did not. The only vending machine onsite is beverage, not helpful when a kiddo is suddenly starving at 10pm. Decent location, not difficult to get to, close enough to food, events, etc

Thank you for your recent stay with us. We certainly look forward to seeing you again on your next trip to this area.

Report response as inappropriateThank you. We appreciate your input.
This response is the subjective opinion of the management representative and not of TripAdvisor LLC
Elizabeth247
San Francisco Bay Area
12298
Reviewed 4 September 2019
Great visit and service

I was hesitant to stay here because of the reviews but it was a lovely stay and gracious service. My room was just fine and quite comfortable. Not too noisy despite being sold out. I'd stay here again. Breakfast served.

Thank you for your recent stay with us. We look forward to seeing you again.

Report response as inappropriateThank you. We appreciate your input.
This response is the subjective opinion of the management representative and not of TripAdvisor LLC
jaclynm780
Brooklyn, New York
2
Reviewed 8 August 2019
Overcharged with no response

I had several family members stay here for a family gathering in April. I was overcharged but didn't discover it until after the fact, and also found out my Aunt was as well. We've tried calling and emailing and left multiple messages and no one has called either of us back with any type of explanation or response to refund our money. Poor management!

This review is the subjective opinion of a Tripadvisor member and not of TripAdvisor LLC.
Bethanie S
1
Reviewed 7 August 2019
Worst Place I've ever stayed

I tried calling the hotel for a question I had 4 times with no answer. Not such a problem. When we arrived for check-in the front desk lady was very pleasant. When we got into our room, there was hair in the bathtub (I'm not talking like A HAIR, I mean hairS), and the hand towels were not only stained, but one of them had clearly been previously used. We had to leave shortly after checking in, so I didn't have time to walk back to the lobby to let them know. So while I was out I called at least 4 more times and NO ONE ANSWERED STILL. By the time we got back, it was late and I was exhausted so I didn't deal with it then either. It was so hot that night, about 90 degrees, but there was NO fan in the room. And then I woke up the next morning with a huge spider bite and ants taking control over the vanity counter. I packed up, checked out, and told the attendant in the lobby (a different person) about the issues we'd had. At BEST I'd thought maybe we'd get comped or discount. But I was not even offered an APOLOGY. I was told, "I'll talk to the housekeeper responsible for that room and get on to her." Are you serious??? No apology whatsoever. This place was awful. $150 a night for a nasty place. Don't even bother. I won't.

We are sorry that you had an unpleasant experience during your stay with us. We will deal with our internal issues. As a token of our appreciation and your inconvenience, we would like to offer you a room of your choice comped by us. Please call us to make that arrangements directly to the hotel. Once again, we apologize for your unpleasant experience.