Shithouse - I will never stay there... - Review of Albert Park Motor Inn

Noisy air conditioner on the wall - even at low fan speed
Shower head is like a sprinkler that sprays everywhere except on your body
Sitting on the bed is like sitting on a trampoline - hopeless
The TV is weak and you can bearly hear it from the trampoline, er, I mean bed

At least $30 more than the best place to stay in Longreach.

Room tip: Do not stay there !
See all 464 reviews
Nearby Hotels 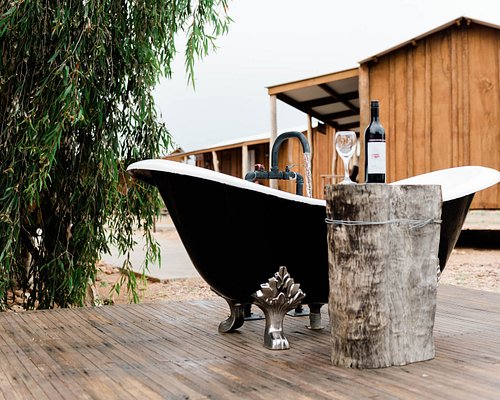 Longreach Motor Inn
US$ 152
US$ 141
Tripadvisor
View deal
Expedia.com
Travelocity
Trip.com
US$ 152
View all 16 deals from US$ 141
366 reviews
1.6 km from Albert Park Motor Inn
We compared the lowest prices from 16 websites We were originally booked into Longreach Motor Inn but that was cancelled due to Covid. A couple of weeks later we were able to go to Longreach but were booked into Albert Park. This is a very average establishment. Brick walls in room, small bathroom and 3 pillows?? The dining room (expected) has been closed for some time, and as the place is a good five minute drive out of town one is reliant on a lift from the motel bus into town or asking one of the two places with a courtesy bus to come and get you for a meal. It's a longish walk to Qantas Museum and Stockman's Hall of Fame. Too far for oldies like us. There seems to be only one person on reception etc. at any time, but he was quite happy to pick us up from the airport and drop us off a couple of times. The place needs attention to the garden, the outdoor area off the rooms and in general it's disappointing. No electricity the second day, and no wifi for the final 2 days of our stay. Certainly not worth the money asked for. Would not stay here again.

This review is the subjective opinion of a Tripadvisor member and not of TripAdvisor LLC.
X8169RSjanets
Brisbane, Australia
94
Reviewed 20 August 2021
Absolutely terrible

Had stayed here previously that’s why we booked here again. But it’s now absolutely awful. No restaurant even though it’s advertised. Only found out no restaurant after we checked in. Message scribbled on chalkboard inside reception saying restaurant closed. When I asked how long for I was told it had been closed for awhile. When I asked where we could get a meal I was given a list of restaurants in Longreach and told which ones would provide courtesy bus if we rang them. No offer of courtesy bus from Albert Park. From reading other reviews I’ve now seen that some people were offered breakfast boxes. We were never offered any breakfast boxes even though I could see them behind the reception counter. Rooms are old and tired and badly in need of maintenance. Tiles cracked in bathroom/shower area. Stains on tiles. Paint peeling. Freezer in fridge needed defrosting. It was completely full of ice causing milk to become frozen solid. Wifi hit and miss and kept dropping out. Room cleaning was hit and miss. We decided we’d had enough and checked out a day early. When I asked for refund for the last night I was told that was not possible. I asked to speak with manager and was provided with an email address. I’ve sent an email to that address and to the booking agent. Have not received any response, not even a courtesy email to acknowledge my emails. Customer service does not exist at this establishment. We understand the hospitality industry is operating in trying times and a lot of people are trying to support regional Queensland. But operators also have to look after paying customers. They should not be allowed to advertise services that aren’t provided.

This review is the subjective opinion of a Tripadvisor member and not of TripAdvisor LLC.
cathy764
Helensvale, Australia
10425
Reviewed 14 August 2021
Wheelchair accessible accommodation Longreach

We were expecting that the room we were allocated would be suitable as I had phoned the motel in advance to check that it was wheelchair accessible and they assured me that it was. We paid $217 per night during school holidays for this 3 star room so I was very disappointed when the room was not as described. There was a step from the car park into the room, although we found a plywood, worn ramp at the end of the car park that my husband was able to drag to our room to use. The door knobs on the doors were 1/4 way down from the top of the door and so couldn't be reached from a wheelchair. The bathroom was not wheelchair accessible. The shower cubicle was a standard size with the hob removed and two grab rails on the walls. the toilet was low and there was no room to park a wheelchair next to the toilet. There was a wheel under sink but the spout was so short that you couldn't get your hand under the tap. The motel is in a great location but it lacks maintenance, cleaning, and would benefit from some updating. The staff also need training in what information to give customers over the phone regarding the rooms. The bathroom was so unsuitable that I could not shower. The manager could only offer us a 10% discount, which we accepted but if there was other accommodation available at this busy time, we would have left and gone elsewhere and asked for a refund.

This review is the subjective opinion of a Tripadvisor member and not of TripAdvisor LLC.
John N Shirley D
Mount Isa, Australia
2813
Reviewed 9 August 2021
Something Has gone very wrong

Used to be the best Motel in town. Great staff, Resturant and spacious rooms. Well the rooms are still the same with enough space for a couple of lounge chairs to sit and relax in but that is where it ends. Lost phone booking and could not supply origional room? Guy on resception needs a lesson in Customer service. Overall attitude just could not be bothered. None or limited Internet. No offers even of contenintial breakfast even though there are plates, tosters etc in the Room.. Believe owners have arrived to get things sorted so recommend still giving it 1 go. We will next time we pass through.

This review is the subjective opinion of a Tripadvisor member and not of TripAdvisor LLC.
kathw219
Whitsundays
7
Reviewed 1 August 2021
Dirty, Unkempt, Out of town.

Stayed here as it was booked for a conference. Rooms were grubby, bathroom filthy. Was serviced 1 day out of 4. Discovered on arrival that restaurant was not in operation. Grounds could be quite nice but completely neglected. In short, do NOT stay here.

This review is the subjective opinion of a Tripadvisor member and not of TripAdvisor LLC.
View more reviews
PreviousNext
1234…
<script type='text/javascript' crossorigin='anonymous' async onerror='__scriptLoadError(