We stayed a couple of nights on a powered van site. Not cement, but roomy. Good location & a nice little Cafe by the Beach. The pool was dirty & not cleaned whilst we were there. The shower was full of dirt & leaves, however a big sign saying "Always shower before entering the pool or Spa'. No sun lounges or sade. Very old & cracked tiles & cement. Better Caravan Parks in Bowen

Trip type: Travelled as a couple
See all 43 reviews
Nearby Hotels 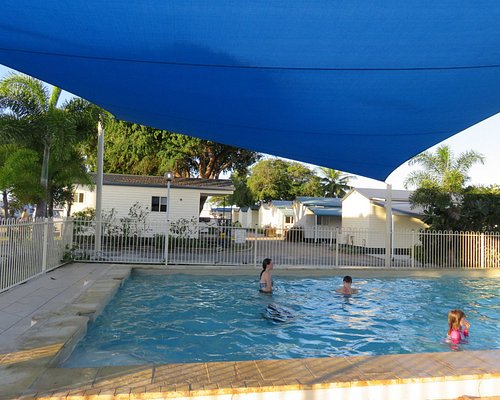 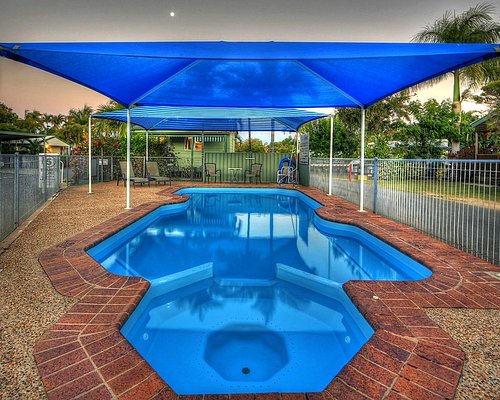 ZenHotels.com
View deal
Priceline
US$ 80
Booking.com
US$ 80
eDreams
US$ 80
View all 5 deals from US$ 80
26 reviews
7.4 km from Horseshoe Bay Resort
We compared the lowest prices from 5 websites
Bluewater Harbour Motel

We tried this “resort” after friends had visited the area. The bay and surrounds are beautiful with a couple of other bays to visit close by.

The resort caters for camping and caravans. It has several cabins and a small bank of motel type units and a pool. There is a sizeable cafe on site between the accommodation and the bay. This is where it went pear shaped.

We booked a “bay view” cabin, at extra cost. On arrival we were taken to the accommodation, which was a few feet from the cafe. It was 2.30 on a Sunday. There was live music blasting from the outside (only) seating area. I was not happy but was reassured by the young lady it stopped at 4pm. It went till just before 6pm, closing time and apparently this happens every weekend.

The cafe opens around 7am till 5pm weekdays and until 6pm weekends.

The cabin was more glimpses of the bay rather than bay view and I certainly do not believe it warrants the extra paid. As per photos, when sat on the patio, we are almost outside the back doorway of the kitchen, which is open, with staff coming and going, for 10hrs per day. Other cabins, within a few meters away, are cheaper and no different to “bay view”. Some cabins are fully equipped with 2 burner electric stove, full size fridge, microwave, cutlery and cooking equipment, others not self contained.

Our cabin (blue) was well appointed, very clean with air conditioning. The lady on reception was very nice and I handed over a list of a few things that I felt were needed to be added to the cabin when we were leaving. We left something behind and they were gracious enough to call and forward this to us.

I do not have a problem with the staff, area or cabin itself, but absolutely do not believe this particular cabin (and the one next door) should have an extra charge for a really bad outlook. A warning of this would be good so you can make a decision where to stay within the park.

We would certainly visit the area again but definitely not book the “bay view” cabins.

This review is the subjective opinion of a TripAdvisor member and not of TripAdvisor LLC
happiest_tripping
Manly, Australia
182
Reviewed 9 October 2019 via mobile
Awesome find

Horseshoe Bay is stunning and the Family cabins are fabulous. Everything looked shiny and new inside. Separate bedroom very comfy, an alcove with bunks for the kiddies and a good sized kitchen with full size fridge. Lovely deck with new outdoor furniture overlooking beautiful gardens and only steps to the beach. Great pool onsite and a great cafe just in front of the resort for brekky / lunch or coffee and cake :)

Thanks so much for taking the time to leave such a lovely review. We're so glad that you enjoyed your stay. Wishing you all the best and hope to have you back soon. Kind regards, Tess

Report response as inappropriateThank you. We appreciate your input.
This response is the subjective opinion of the management representative and not of TripAdvisor LLC
DanielC417
Nijmegen, The Netherlands
8052
Reviewed 25 March 2019 via mobile
Two ladies on reception went above and beyond

Stayed just the one night at this resort and was absolutely delighted with the service we were provided.

We are budget backpackers so this is not a normal type of place for us but the service we were provided made it worth it. The staff on reception went out of their way to make our stay more comfortable.

Location is perfect with outstanding beaches and views within a few minutes away.

Thank you for taking the time to review!
We appreciate your feedback and are very glad you've enjoyed your stay! Travel safe and hope to see you again!
Kind regards,
Tess

Report response as inappropriateThank you. We appreciate your input.
This response is the subjective opinion of the management representative and not of TripAdvisor LLC
NaomiH927
London, United Kingdom
6060
Reviewed 30 August 2018
Busy campsite - lots of regulars

Stayed two nights with a 6 berth motorhome.
It was QLD winter and the site had a lot of regular grey nomads in situ - they had formed a horseshoe bay social club and the site had lots of things going on such as live music from the camp kitchen at 4pm one day, a film night and other things. Not many empty pitches (if any).
Facilities were clean and tidy. Camp kitchen good - a couple of BBQ's, don't remember a hob. Good sized fridge.
Overheard that it had new owners a couple of years ago and they are gradually upgrading.
Only a short walk to the beautiful horseshoe bay beech
Free wifi but poor connection