Believe the things you've probably just read on Tripadvisor. Yes, Nxabega is this amazing! Wonderful tents, beautiful main and dining area and amazing staff. This was our first safari tour so everything was new to us. Staff made us feel comfortable at once, even when elephants were visiting our tent on our first night. Food is amazing, they will serve a lovely high tea before you'll go on your afternoon drive. Loved the sundown drinks!
Our guides Candrew and Sea were fantastic, kids learned so much about the amazing wildlife you will encounter.
Even though the water level was low, we could not have asked for more interesting drives. Big thank you to Nxabega!More 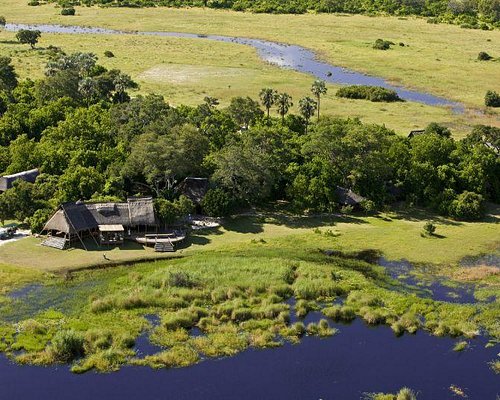 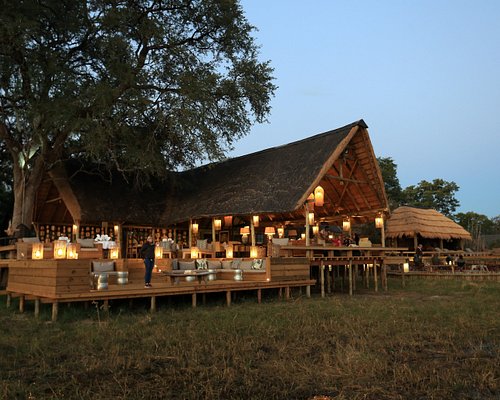 Our mouths hung open when we arrived and saw the facilities. Large pool, three (or four?) dining areas, games room, bar, all of it so elegantly appointed I just about forgot that I was in the middle of delta. Talk about pampered! Everything is perfectly coordinated--you tell *your* team when you want lunch and dinner (straight after your morning/afternoon safari, or after you freshen up?) and everything goes perfectly smoothly from there.

If any luxury was missing from either the room or the central areas, I couldn't find it. Dessert at both lunch and dinner! (Worse yet, I ate them. All of them.) A DIFFERENT fresh bread at every meal. White tablecloths at dinner with a choice of appetizers and entrees. A bar in the room, drinks to welcome you when you arrived back every time you arrived after your excursion, the list of all the little touches that made us feel utterly pampered goes on and on and on. Including a lovely book for you to write in and keep with lists of animals and birds (to check off which you've seen) and places to add your own notes.) Our personal waitress/hostess knew our preferred beverages after a single day and she checked in whether we were having those (or if she could suggest something else.)

That something else being from the bar. I felt like we were constantly disappointing everyone because we only drink wine or beer with dinner. The evening "welcome home" drinks (which we did drink) were alcoholic (but not strong.) Remember that all the alcoholic beverages are included. And they are available ALL THE TIME. I wonder if people from other parts of the world consider sobriety overrated? Anyway, if you want to partake, it is everywhere and in quantity.

So--ANIMALS! The reason we came, after all! We saw EVERYTHING. Oh my goodness. This camp uses TWO guides, not one. Or rather, one is your guide and the other is a tracker. Our guide was Case and our tracker was Master. They were both amazing, and showed us a lot about tracking (especially the last morning when they were determined that we were going to see the rhino. More about that later.) We saw PREDATORS! We saw leopards and two leopard cubs, we saw a cheetah, we saw hyenas (with four puppies who were about the only animals interested in us/our truck. They explored under it, bit the tires, touched the sides--all in all were amazingly cute), and we saw wild dogs. Nxabega means "Place of the Giraffes" and giraffes are my favorite animals, and we saw a good number of them, fortunately. With babies, too. We did see elephants (not as many as we had seen up north) and water buffalo and lot of fabulous birds, including eagles and owls. And the rhino.

The And Beyond is a fairly large company that runs five (I think) camps in Botswana and about that number in South Africa, as well as other places all over the world. But they're not just about making a huge profit. They put money back into the region, into the people and the wildlife. In Botswana they are building a school. And they have been working on this rhino project for years, and the rhino we saw was part of that rescue.

Case our guide told us about his. In South Africa a rhino is killed every 18 hours. Botswana has extreme wildlife protection policies and keeps the forces to enforce them. And Beyond has been airlifting rhinos from South Africa to Botswana, to regions that have been identified as possibly good environments for them to thrive. Five were brought to the Delta something like ten(?) years ago to see if they adapted to/liked the area. They are thriving there, and one staked out a territory that includes a good part of the camp's region. (They need very large territories.) So Master and Case spent a good bit of the morning tracking him (it IS a him, known.) And they found him (while showing us what clues they were using to indicate where he was) so we saw him. That was truly special. And it made us feel even more positive about And Beyond as a company (and I bought one of their shirts, because we chose to go to Botswana to support their conservation policies.)

And Beyond did a extra final touch that made our stay even more memorable (though really, the leopards, the cheetah, and the hyena babies--and the rhino--are going to be our most valued memories. Oh, and the monkey stealing a banana and grapes from the bowl as people were setting up for tea. That monkey knew exactly what s/he was doing and they they were NOT supposed to be there, either! Hilarious.) The final evening someone (Case said the managers) had set up a very special happy hour display with chairs and gas lanterns and elegant wooden tables (and a display of prime alcohol) and super-nice snacks--samosas with sauces--and we sat and watched the sun go down near with a herd of hippos (my husband's favorite animal) and it was--glorious. Even if they did make our gin and tonics with Absolut vodka. :-) Just so lovely. I mean, there was a happy hour/sunset stop every evening, but nothing so special as this.

The time we spent at Nxabega was truly magical.

This review is the subjective opinion of a Tripadvisor member and not of TripAdvisor LLC.
John A
61
Reviewed 12 July 2019
Amazing Experience

No water in the delta, no problem! We saw more wildlife than we could ever have dreamed of including the first day out of the den for 10 wild dog puppies. We also hunted with them on 4 occasions which was the whole purpose of our holiday but not expected here! Our whole safari experience here would have been different if limited to boats and for us the dry land experience was perfect. The accommodation is stunning and first class. The staff are wonderful and every wish (for us) was catered for. The food is restaurant level. Our 4 nights here were very special.

This review is the subjective opinion of a Tripadvisor member and not of TripAdvisor LLC.
Andrewschoeman
Skukuza, South Africa
21557
Reviewed 3 July 2019
A Gem in the delta !

I was fortunate enough to spend 3 nights at Nxabega, the camp and rooms are beautiful and set on a seasonal floodplain but this was dry during our visit due to the dry conditions, the staff, meals, hospitality was excellent and the game viewing was exceptional, we saw lots of wildlife as well as denning wild dogs and Hyenas, lions, leopards, a massive herd of buffalo and lots of Elephants coming to drink at the lodge. It really was a super visit.

This review is the subjective opinion of a Tripadvisor member and not of TripAdvisor LLC.
brownie58
sydney
72
Reviewed 27 June 2019
Exceptional!!

This place is amazing and, when we were there in June 2019, run most magnificently by Daman and Judy. They run a fabulous team of people and every one we met worked together to provide their guests with top class customer service. Housekeepers, ground staff, restaurant crew and management all work together. Kitso served us every day in the restaurant area and she is just so beautiful, so kind, intelligent and amazing at her job. Our tracker, Sea, is an accomplished tracker and just a great person with a wonderfully warm and kind personality, he also makes awesome cappuccinos!!! Candrew was our guide and is exceptional at his job. His customer service was flawless and his knowledge of the concession and all things safari related outstanding. He has a wonderful personality and we all had so much fun together. We had the most amazing time and were very sad to say goodbye. We really missed you all when we left as you became great friends in such a short period of time. I wish you all good health and happiness and the recognition you deserve for being amazing people doing exceptional work.
kindest regards
Beverly and Shane Brown

This review is the subjective opinion of a Tripadvisor member and not of TripAdvisor LLC.
Stalex24
Amsterdam, The Netherlands
833374
Reviewed 16 May 2019
Nxabega Trails (!)

This review is for the Nxabega Trails campsite, which is NOT the Tented Camp.

The location of the &Beyond Trails camp in Nxabega is wonderful: it sits on the edge of the water. Breakfast and dinner are served in the main area, which overlooks the water. The camp consists of 3 or 4 dome tents with great views. There are very comfortable beds, with excellent linnens. Then there is the main area, which is open air and covered. The oil lamp lighting for dinner is like a fairy tale and creates a wonderful atmosphere. The staff are friendly, with Thuli being in charge and taking excellent care and Vincent, who is probably the biggest &Beyond chef. His cooking is delicious.
All staff are very attentive and friendly. Meals are excellent, especially if you think of the logistic challenge everybody faces. Drinks are ample and cold.
Recommended.

This review is the subjective opinion of a Tripadvisor member and not of TripAdvisor LLC.
View more reviews
PreviousNext
1234…
<script type='text/javascript' crossorigin='anonymous' async onerror='__scriptLoadEr