Stayed at Song Tien at My Tho on the way to other Mekong cities.

It was very comfortable and excellent location right on the river front.

The staff are great and Tuan on the front desk looked after us extremely well. His English is excellent

Not far from the Vinh Trang temple that has nice gardens and some of the biggest Buddha statues in Vietnam
The temlle dates back to about 1840 and looks almost Indian from the front. It is massive and on about 5 acres.

Trip type: Travelled with friends
See all 26 reviews
Nearby Hotels 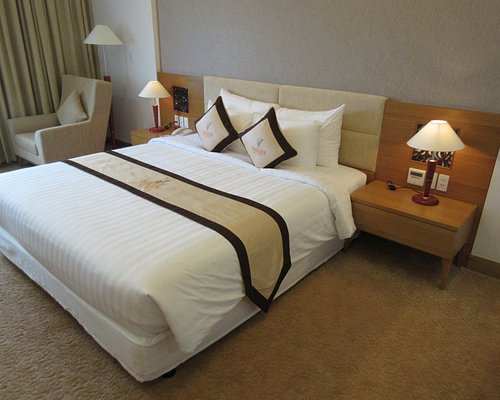 Breakfast included
Mekong My Tho Hotel
US$ 59
US$ 56
Tripadvisor
View deal
Reserve now, pay at stay
Priceline
Lol.travel
ZenHotels.com
US$ 59
View all 8 deals from US$ 56
51 reviews
1.0 km from Song Tien Hotel
We compared the lowest prices from 8 websites 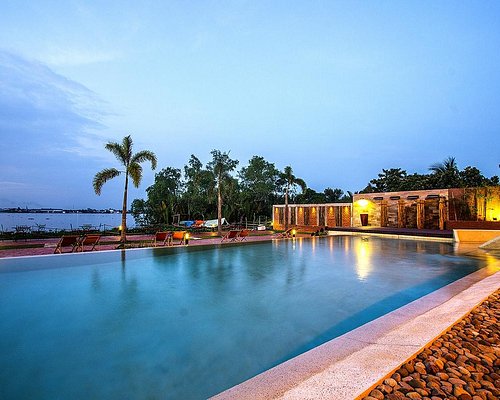 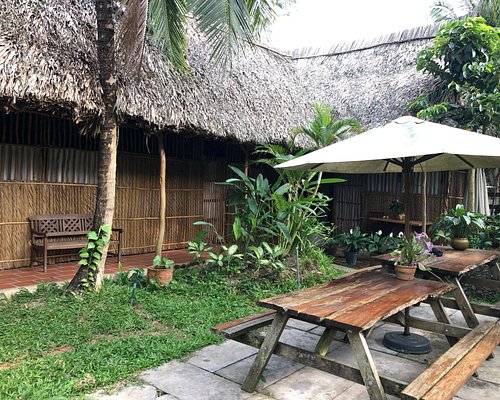 I liked this place except for the door to the room. The doors had obviously been kicked in, ie: the rooms robbed before. The repairs to the door weren't that good and the new locked and door handle didn't leave me with a feeling of confidence.

They have an elevator but it is small. The people at the front desk don't speak english so have a phone with google translate.

The streets around it are iffy after dark.

First thing you get when you open your door is a very powerful musty smell, not nice, reception staff try hard but they are very young, we were staying for 2 nights but decided to cut our losses and go back HCMC after 1 night. When turning the tap on in the bathroom the water pours out onto the floor, the basic plumbing was terrible and may have contributed to the musty damp smell

This review is the subjective opinion of a TripAdvisor member and not of TripAdvisor LLC
valentina888
21
Reviewed 3 January 2015 via mobile
Nothing special, dirty rooms

We made the mistake to travel to my tho in our own (personnaly, I don't think it was worth the trip, there was nothing charming about this town) and had to stay overnight because we missed the bus back to Ho Chi Minh - although I am still not sure if this was true, at least that's what a really pushy xe om driver told us. He also wanted to sell a boat tour and followed us the whole afternoon even though we kept refusing).

We then checked in this hotel because it was near to the market. I can agree with the other reviews:

- the carpet in the room is disgusting (do not take your shoes off!)
- the bathroom was dirty
- sheets and towels were stained
- at night it was quite, but in the morning the street noise will wake you up (windows don't close properly)

I can't say that it was a horrible experience (I have seen worse), it was OK for one night. But I would never ever stay longer than that. Also, I don't think it is worth 350.000 dong a night (no breakfast, room to the back).

This review is the subjective opinion of a TripAdvisor member and not of TripAdvisor LLC
Line V
Antwerp, Belgium
2
Reviewed 29 December 2014 via mobile
Don't support them by staying there.

Considering our other stays in the Mekongdelta, this hotel was a bad experience. Definitely not worth its 2 stars.

While not asking/choosing for it, a taxi dropped us at their entrance - normally we think that's fishy, but since we've only been meeting really kind people around here we thought we'ld go for it.

We could save 100k by excluding breakfast, and payed 350k per night for a room. The room was quite spacious although not facing the river.

Day 2. Woke up at 8 because someone tried to enter our room, it was locked from the inside, but they tried to use a key anyway, and started knocking us out of bed after that. It was the cleaning crew, while our sign to have the room cleaned was not out. Not nice since we had to catch up some sleep. Next, red ants started showing up in the bathroom, around our backpacks, and in our bed (I even had some antbites). The wifi didn't work properly, although the staff promised they would fix it.

Day 3. We decided to go for the breakfast. Unfriendly staff there, and very expensive for what it was. I even didn't get what I ordered. Breakfast in the streets is way better value.

Then we checked out, and ordered a taxi to the local bus station - explained three times where we wanted to go, but they fixed us a taxi to another place, where busses cost double as much (talking to a local we've found out that people who bring costumers here get some money too). We called the hotel, and they where extremely unhelpful and unfriendly. They wouldn't even want to call a taxi again, and kept hanging up the phone during conversation.

So to conclude: don't support this hotel by staying there!

This review is the subjective opinion of a TripAdvisor member and not of TripAdvisor LLC
tinagargopal
Klang, Malaysia
9744
Reviewed 11 November 2014 via mobile
Dusty floor & dirty bathroom tiles.

I just checked in.
Got a room that faces the opposite side of the river.
The lobby is hot as the main entrance is kept open.
This is the first hotel that I don't feel comfortable walking around in my room without shoe or sandals.
If I could find another hotel, I would gladly say bye bye for good.
#facepalm