Basic, clean room next to the dive site - Review of Puri Madha Bungalows

Basic, clean room next to the dive site

If I recommend this hotel to my friend, it is because ;
- it is the closest hotel to the ship wreck dive site.
- this hotel has nice friendly staff
- great diving instructor/dive guide, an experienced underwater photographer
- standard but clean room with reasonable price

I don't know the reason for people staying at Tulamben hotels, aside for diving the ship wreck. The beach is dull, not a white sand with turqoise clear calm water. Not nice to play around with family. It is black rocks becach with dark blue-grey water, but underwater it is okay.

Since no attractions but the diving site, I don't think it's necessary to stay in expensive and overrated hotel, I visited some of the hotels above 100 dollar pernight and it's still the same dull beach view... so I chose the one next to the ship wreck.

Basic lodging with reasonable price, clean room, nice staff, is enough for me, and Puri Madha has that. 20 dollar per night and I got very big, clean room.More 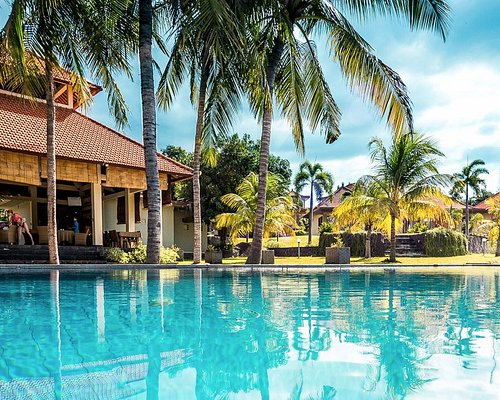 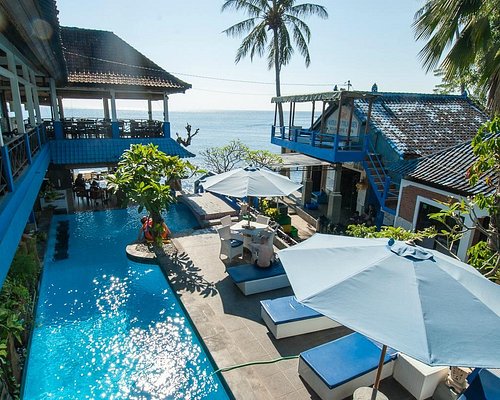 Puri Madha Bungalows is the closest resort to the “Liberty” wreck dive site in Tulamben. The dive site is accessed from the shore and the area is usually very busy with divers during the day, especially groups visiting from the south of Bali.

We had been on an extended dive trip around Bali and decided to revisit Tulamben on our way back to the south. We decided to try Puri Madha and planned to stay about three days. Puri Madha is a small resort with pleasant gardens leading down to the sea wall and the usual choice of cold water/fan-cooled or hot water/air-conditioned rooms. We chose one of the air-conditioned rooms, which are reasonably large, with small terraces outside and a shower that it is possible to stand underneath – quite a novelty in Bali.

When we arrived, around lunchtime, we were told that the previous guests had only just checked out, so our room wasn’t ready. No great problem, so we decided to have a walk around and then some lunch. Miraculously, our room was ready within about ten minutes. Wonderful, we thought, as we were given the key. I was more than a little suspicious that the room could be cleaned and re-supplied so quickly, so I decided to check the bedding. The bed cover is obviously never changed, as there is no upper sheet. The lower sheet had some decidedly suspicious stains, so I went to reception to complain. The man who came to look at the sheets didn’t see any problem at all, saying that it was only “massage oil”. I insisted on some clean sheets and he returned with a sheet with a green swirly pattern – impossible to tell if it had been washed - and simply laid it over the original one. Needless to say, we threw off the pillows and bed cover that night and slept in our bathrobes.

After a pretty mediocre snack lunch – one of our friends judged his hamburger to be the worst that he had ever had – we wanted to go diving. There are no safe deposit boxes in the room, so I went to ask for one at reception, as I was reluctant to leave money and passports in the room unsecured. I was told that they didn’t have any safe deposit boxes at the resort, but that I could lock the items in one of the drawers in the room. This seemed to be the only option, but the key and lock looked pretty flimsy.

We had a pleasant long dive on the “Liberty” wreck, away to the west side, where most visiting divers don’t go. We didn’t use the dive centre at the resort, as we do not need a guide. We also knew that we could hire scuba tanks very cheaply from Aquadive, a small business on the road leading down to Puri Madha. They will even deliver your tanks to the beach by motorbike!

After our dive, we went back to our room for a shower. I had noticed an air-freshener sachet dangling from the air-conditioner unit, but didn’t think too much of it when we arrived. We soon found out the reason why. Although the rooms have only been built for a few years, the shower drain and sewage pipes must all be connected, with no U-bend air locks in between. In short, every time that we or someone in one of the adjacent rooms had a shower or flushed the toilet, the shower drain belched sewage smells. We ended up having to block the shower drain with a water bottle and to keep the bathroom door closed, to keep things tolerable. One of our Indonesian friends told us that his room had the same problem when he stayed at Puri Madha a few months previously. I wish that he had told us earlier!

We checked out of Puri Madha after only one night, instead of the planned three. A shame, because this is a pleasant resort at first glance, ideally situated for diving the wreck at Tulamben. However, with fundamental flaws in the plumbing and poor hygiene standards, I cannot recommend it.