Baymont by Wyndham Battle Creek Downtown
Lowest prices for your stay
Lock in the lowest price from these sites
US$ 102
US$ 84
Reserve now, pay at stay
View deal
Expedia.comUS$ 84
PricelineUS$ 84
WyndhamUS$ 84
Hotels.comUS$ 84
Orbitz.comUS$ 84
HurbUS$ 102
View all 18 deals
Prices are provided by our partners, and reflect average nightly room rates, including taxes and fees that are fixed, known to our partners, and due at time of booking. Other miscellaneous taxes and hotel fees which are not fixed or due at time of booking may be payable at the property at time of stay. Please see our partners for more details.
K1096ZCbrandys
1

This hotel met all my expectations from the location to the wonderful staff and it’s cleanliness I will definitely recommend to anyone to stay at this location. They have a guest laundry a pool so not only was did I have a great stay but my children as well.More

Greetings from Baymont by Wyndham Battle Creek Downtown. Thank you for your kind comments and review regarding our high standards of cleanliness and hospitality. Our ultimate ambition is to provide a five-star experience, and we are thrilled to learn that we have succeeded. We are thrilled to hear that we exceeded your expectations and we look forward to seeing you and your family again!

Report response as inappropriateThank you. We appreciate your input.
This response is the subjective opinion of the management representative and not of TripAdvisor LLC
See all 614 reviews
Nearby Hotels 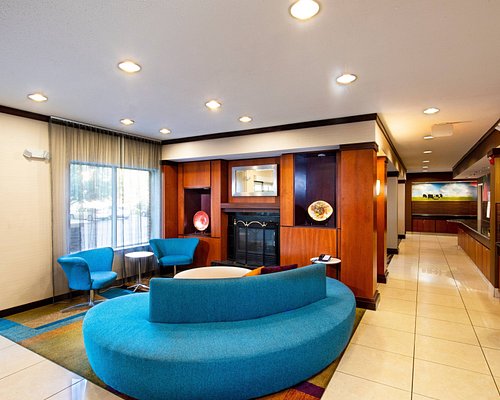 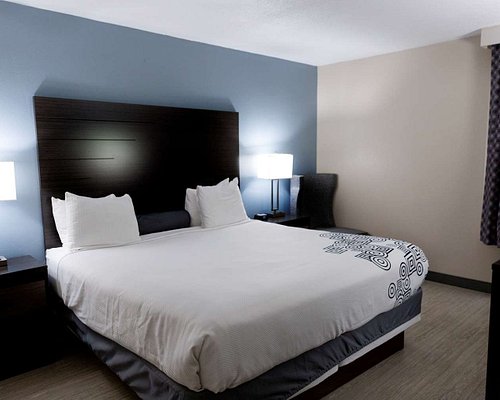 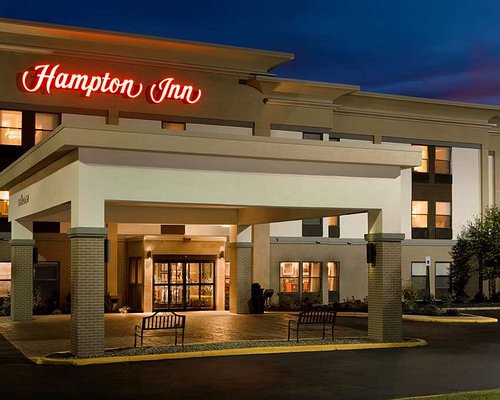 Hampton.com
View deal
Tripadvisor
US$ 103
Booking.com
Lol.travel
US$ 128
View all 18 deals from US$ 103
467 reviews
7.0 km from Baymont by Wyndham Battle Creek Downtown

HolidayInn.com
View deal
Free cancellation
Reserve now, pay at stay
Booking.com
US$ 131
FindHotel
US$ 121
Hurb
US$ 134
View all 17 deals from US$ 121
175 reviews
6.7 km from Baymont by Wyndham Battle Creek Downtown

Customer service is terrible!! Dirty sheets and stains. No towels, couldn't adjoining room that we asked for when we reserved the room. Couldn't get ahold of a manager or a call back. Hallways smelled like weed and people were super loud!!! Paid $109 a night and was horrible!!

Review collected in partnership with this hotel
This business uses tools provided by Tripadvisor (or one of its official Review Collection Partners) to encourage and collect guest reviews, including this one.
Ask ksickl498444 about Baymont by Wyndham Battle Creek Downtown
Thank ksickl498444

Thank you for sharing your experience, and I am very sorry for the inconveniences that you
encountered during your stay. It is distressing to hear that you encountered a number of issues with our housekeeping and
guest services and I want you to know that we take your comments very seriously and are
working hard and fast to address these problems in hopes of improving upon the guest
experience. Know that your voice is very important to us and we are addressing each of the concerns that
you've raised in an effort to improve upon the guest experience.
Please keep us in mind for your next stay in the area.

Report response as inappropriateThank you. We appreciate your input.
This response is the subjective opinion of the management representative and not of TripAdvisor LLC
amschul7
1
Reviewed 17 February 2021
Toilet of a hotel

Do not stay here unless you have a full body suit. The loss of sight and smell would be beneficial if staying here. If you look at the pool area, you will think it is a decent place. That is not the case. The one on 94 is a much better Baymont. Stay there

Review collected in partnership with this hotel
This business uses tools provided by Tripadvisor (or one of its official Review Collection Partners) to encourage and collect guest reviews, including this one.
Ask amschul7 about Baymont by Wyndham Battle Creek Downtown
Thank amschul7

Your review and rating of our hotel mean a lot to us, and we thank you for taking the time to share this experience. We want you to know that your feedback and description of your experience at our hotel is of utmost importance to us. On behalf of our entire staff, we thank you for your business and we hope to see you again when your travels bring you back to the area!

Report response as inappropriateThank you. We appreciate your input.
This response is the subjective opinion of the management representative and not of TripAdvisor LLC
neenee1997
1
Reviewed 14 February 2021
Not worth it, don’t waste your time or money.

My boyfriend and I rented a jacuzzi suite for Saturday, February 13th for Valentine’s Day. When we arrived for our 3:00 PM check in, our room wasn’t clean or ready. Neither were the rooms for the 2 couples ahead of us. We waited in the parking lot for an hour and were finally able to check in around 4PM. When we walked in our room, it smelled like cigarette smoke. Tried to turn on the lights and 2 out of 4 of our lamps didn’t even work. My boyfriend took the bulbs to the front desk and asked if we could have replacement and they told him to “leave the bulbs in the lamps, I’ll replace it when we get some, we don’t have any right now”. What kind of hotel doesn’t have extra light bulbs....? The fire detector was literally hanging off the ceiling so who even knows if it was functional. The “complementary breakfast” consisted of 2 mini donuts and some cereal and a couple pieces of bread. So I asked if they still had bagels. Thankfully they had some of those in the back so we could actually eat something. The staff was friendly for the most part and the jacuzzi actually worked. That’s the only reason this place didn’t get zero stars. Don’t waste your time or money.

Thank you for sharing your experience, and I am very sorry for the inconveniences that you encountered during your stay. Your satisfaction and enjoyment are very important to us and we appreciate your comments regarding where we can improve. We do appreciate the compliments to our front desk staff and the jacuzzi as well. We are also forever working to improve upon the guest experience and I hope you will remember our attributes and return to see how we have improved to impress you even more.

Report response as inappropriateThank you. We appreciate your input.
This response is the subjective opinion of the management representative and not of TripAdvisor LLC
Journey144663
1
Reviewed 12 November 2020
If you like your milk expired by 8 days, this is the place for you. Otherwise, stay away!

First, our room wreaked of smoke, in a non-smoking hotel. The room next to us was the culprit (connected rooms, locked), and probably had been for days. They are replacing carpet apparently but it looks used. The pool is a staging area for old mattresses, which is an eyesore. We had the continental breakfast the on the morning after our first night. It was not ok. My daughter-in-law and I were eating a bowl of cereal (plastic bowl and spoon) with skim milk. We apparently both thought it tasted funny but attributed it to the bowl and spoon. It turned out it was 8 day expired old milk. The front desk clerk tossed it out without telling us why or asking what we were eating. So I asked, She said it was bad, and still didn't ask us what we were eating. We both had stomach issues through the night and most of the next day. Travelling home wasn't a pleasant one as we had to stop at multiple rest areas, adding an hour to a 4 hour trip. We did get moved to a different room upon request. It smelled better. Lots better. The smoky room shouldn't have been rented until it was fumigated and I guarantee someone knew it was an issue. I spoke to the corporate office and they offered me 6000 rewards points. Seriously? So, when I balked, they upped the offer to 30% off. Still not good enough. I can only imagine how many other food borne issues could be coming out of here given they provided us 8 day expired milk. I've called the hotel repeatedly and no-one answers.

Room tip: Walls are thin. I could hear the guy in the next room all night long.
Ask Journey144663 about Baymont by Wyndham Battle Creek Downtown
Thank Journey144663

Thank you for bringing to our attention your experience and comments regarding your stay. I am so sorry for the skim milk and the inconveniences that you experienced during your most recent stay with us. Know that your voice is of tremendous importance to us and we are confronting each of the issues that you mentioned to ensure that no guest has this experience in the future. We hope you'll return someday to see how we have addressed and improved upon the issues that you have expressed, thanks to your valuable feedback.

Report response as inappropriateThank you. We appreciate your input.
This response is the subjective opinion of the management representative and not of TripAdvisor LLC
jmshandick
1
Reviewed 30 September 2020
Very bad

Very run down do not stay here.. Room was ok and cleaned but really run down. needs paint new carpet. Not the best smelling place. Pool was empty and looked like a storage unit.. Hallways were dirty. Just very dirty

Review collected in partnership with this hotel
This business uses tools provided by Tripadvisor (or one of its official Review Collection Partners) to encourage and collect guest reviews, including this one.
Ask jmshandick about Baymont by Wyndham Battle Creek Downtown
Thank jmshandick

Please accept our sincerest apologies for the housekeeping issues that you encountered during
your stay in our hotel. We thank you for taking the time to share your experience and we want to assure you that the
housekeeping issues which you have brought to our attention are being addressed with
renewed efforts to improve upon our policies to ensure that each guest has a pleasant and
comfortable experience in the future.I hope that you will consider staying with us again so that we can have another chance to
provide you with a superior experience.