Nice Hotel near the Creation Museum and... - Review of Holiday Inn Cincinnati-Riverfront, an IHG hotel

Nice Hotel near the Creation Museum and Ark Encounter

We came here with a tour group. My husband and I enjoyed our time at this hotel. The people were friendly and made you feel welcome. Because of this we are considering coming back to the area in the future and staying here again. My husband has problems with his back and and the bed was comfortable and the room was quiet and we both got a good night's sleep. Our room was very clean. The whole property is kept well and very clean. While there I needed a safety pin. I called the front desk thinking they might have one. They sent an associate from housekeeping up with a handful in various sizes-wow was I thankful they went the extra mile-it meant a lot to me. There were a few downsides to our stay. The shower drain was slow emptying the water. The one lamp did not work. The toilet paper was awful-next time I'll bring my own.More

We appreciate you taking the time to write a review. I’m pleased to learn that your stay was enjoyable and comfortable overall. We appreciate your compliments which highlight what we are doing well and your recommendations for areas of improvement. Your review is valuable because it is how we monitor and improve our guest experience. Thanks again and we humbly request a return visit.

Report response as inappropriateThank you. We appreciate your input.
This response is the subjective opinion of the management representative and not of TripAdvisor LLC
See all 610 reviews
Nearby Hotels 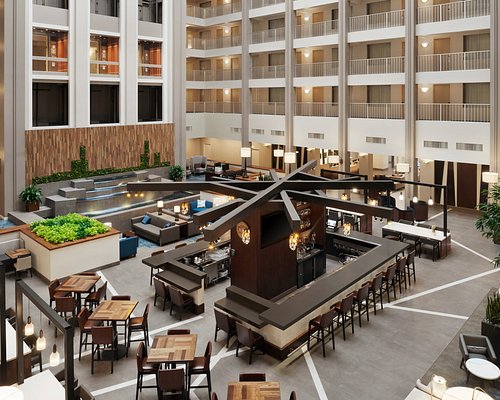 Hotel was fine for an overnight stay with our dog. Room carpet is a little worn. Area is walkable and has some historic charm but feels a little depressed. Homeless person in the parking lot. Reception was excellent. Parking was convenient. Room was clean and had fridge, microwave and coffee maker. McDonalds very close.

We aim to impress, so I'm sorry that your visit was just okay. We are glad that you enjoyed our accommodations, parking, and evening reception. Your comments, which highlight our successes and areas for improvement, are welcomed as they foster change for the better. Thank you for taking the time to share your review.

Report response as inappropriateThank you. We appreciate your input.
This response is the subjective opinion of the management representative and not of TripAdvisor LLC
Cherylcam68
Richmond, Kentucky
3424
Reviewed 15 July 2021
Fit the Bill for our needs

There are very few hotels in the Cincinnati area that have outdoor pools but this one does. For this reason, it is the choice of many during Jimmy Buffett concert season. Our group of 10-15 chose this hotel for the pool experience and will continue to choose it year after year. It was fun to hang out at the pool with other fellow parrot heads and meet folks from all over. This hotel is older but has been remodeled to keep up with today's standards. It is not luxurious by any means but is clean and well kept with friendly staff members. Jeff ( I hope I got his name right) was very professional and offered us an early check in, which we greatly appreciated. We requested a room away from the elevator and this request was honored as well. The bed was very comfortable and offered a great night's sleep. Kudos to all at the Holiday Inn Covington on a job well done!

Thank you for taking the time to share your kind review. I’m glad you found our location convenient, accommodations comfortable, and staff friendly. We look forward to being your hotel of choice when in the area for business or another concert.

Report response as inappropriateThank you. We appreciate your input.
This response is the subjective opinion of the management representative and not of TripAdvisor LLC
Jdub317
Carmel, Indiana
7929
Reviewed 15 July 2021 via mobile
What a dump

We booked two suites for three nights at this Holiday Inn. There was only one positive experience our entire stay and it was when I called the day before and asked the general manager if we could check in early because we are nurses and had worked 12 hours then drove 3 hours to the hotel and he agreed to let us check in earlier than the 2pm time that all elite members get. I get to the rooms to find them not very clean and dirty socks on the floor in front of the sofa. I used the restroom and attempted to wash my hands and the handle came off in my hand. I called the front desk and they sent a maintenance worker up and after a few trips in and out of my room he said the only way to repair the sink was to call his boss and get permission to shut off water to the entire floor. So I told him no need for all that we will just use the living room sink. The AC in the living room worked fine but the bedroom AC didn’t which made it hard to sleep. We went down to bring our luggage up from the cars and got two luggage carts both of which were broken with flat tires and impossible to steer. Told the front desk about it and they said they were working on ordering new ones. Well that doesn’t help me much with my luggage and getting it to the 3rd floor. When we checked in we were told that they were very short staffed so no housekeeping would be offered and we would need to come to the front desk if we needed anything. Each time we went in and out we noticed a lot of people loitering in the halls near the doors and just outside the doors which made us feel uncomfortable and unsafe. They were sitting in the halls laying across the luggage racks and sitting up and down the sidewalks at the entrances. It seemed more like a weekly hotel that people were living out of so when I spoke to the manager and brought this up he told me they were housing residents who were displaced from a apartment fire. I feel bad for the people but we were on vacation with my elderly mother and two small children and it just made me tense. The next day during our 10 year olds birthday party our 3 year old got under the desk on the floor and found 3 pills which were controlled substances and could have easily put them in her mouth. Thankfully we saw her and immediately took them from her and contacted the front desk who said someone would be right up and they never came up. Then we went to the zoo and after being there all day we returned to find neither of the room keys worked to either of our suites so I went to the front desk and complained and the clerk made new keys and I asked her was she sure they were done correctly so we wouldn’t have to go through this the next day and she told me that she just got there and not to talk to her like that. Just some more of the great customer service we received from this hotel. The next day we received a text asking us to rate them 1-10 with 1 being the worst so I gave them a 1 . Then the manager Chevonne texted back that it seems like they can’t do anything to please us and that their hotel wasn’t a good fit for them? Well excuse us for wanting clean rooms with working water and AC and without drugs on the floor that our kids might have eaten. I know that sounds really like an unreasonable expectation. I tried to call guest relations many times to move us somewhere else and we held for hours and they never came to the phone. Restaurants were closed because of no staffing. All of this made for a horrible vacation. This hotel needs major renovations and updates. They need qualified management and staff that can deliver excellent customer service. We are elite members so I can only imagine how they treat everyone else.

Thank you for taking the time to review your recent stay with us. I am sorry to hear that we were unable to provide you with the excellent service and accommodations that you expect and deserve as an Elite Member.

As I mentioned in previous responses to your other reviews on different platforms, we did attempt to assist you with your concerns while on property and continue to want to make things right. Again, if you would like to discuss the issues you experienced directly with me, please do not hesitate to contact me at the hotel.

Report response as inappropriateThank you. We appreciate your input.
This response is the subjective opinion of the management representative and not of TripAdvisor LLC
3ess
western NY state
16135
Reviewed 13 June 2021
This is one of the low end Holiday Inns. Better places for the same, or less, cost.

I suspect the hotel was recently spruced up. Perhaps it was acquired from another brand, as some signage implied Best Western. Carpet is new, paint is also, but a brown mustard color wall in the room is off-putting. We could feel the support (wood slats?) in the mattress, which was not well padded, and uncomfortable. Everything was very clean. Staff polite and helpful EXCEPT the breakfast server. She was on her phone incessantly, failed to state the offerings except to the males. Rude to females. Skimped the servings to females. Had to ask every morning what the offerings were; although all the men got told on arrival. The second she put the food on the plate, she left the serving area and went behind the "screen" and got back on the phone. Air conditioning did not keep the room very cool. Clock was flashing 20:00, and we could not change it. Told reception it was broken, and after 2nd request someone came and played with it to announce that it was broken. We knew that....but we did get a new one. Parking lot is difficult to access and exit due to hotel location. Would not return to this hotel.

It’s important to our entire team that all our visitors feel comfortable, so I’m very sorry that you did not enjoy your stay. I regret the lapses in service you experienced; please forgive us. We hope you will reconsider a return visit. We'd love the opportunity to serve you better should your travels bring you back to the area. Thank you for staying with us.

Report response as inappropriateThank you. We appreciate your input.
This response is the subjective opinion of the management representative and not of TripAdvisor LLC
M6902NHchrisw
1
Reviewed 20 April 2021
Thanks Seidou