Do Not Use the Pool! - Review of Holiday Inn Express Vernon-Manchester

Do Not Use the Pool!

My family including 2 young children, were scheduled to here for Friday and Saturday due to the Power Outage. Friday night was fine. Saturday my children were in the pool when a handicapped person came in to use the pool. He was placed by his caretaker in the pool handicapped chair and lowered into the water. The caretaker proceeded to use soap and a facecloth to bath to the gentleman. Washing his feet, in between his legs, under his arms, etc. Ringing out the facecloth in the pool & continuing to wash him. We evacuated the pool and the maint. man came in and said this was disgusting and put a treatment in the pool & said it would take 3 hrs to take effect. We went to the manager & he said that he was doing therapy & bathing & he would not ask them to stop bathing in the pool. We left and lost our money for Sat night. The manager laughed when we asked for a reimbursement & proceeded to go outside and smoke a ciggerate We complained to corporate & they were much more helpful. During a pandemic this makes me nervous the uncleanliness & unwilling to rectify this disgusting issue of having people take baths in the pool.More

Thank you for choosing to stay with us and for posting a candid review. I was very concerned to read your comments about another guest bathing in the pool and how our manager handled your concern. I understand your dismay, and I am sorry. This is not the frictionless experience that we wanted for all our guests. I will make sure to share your comments with our team for the necessary improvements needed on our end.

I would also like to follow up on your concerns that is why I sent you a private message. I hope you get the time to read it and respond.

Report response as inappropriateThank you. We appreciate your input.
This response is the subjective opinion of the management representative and not of TripAdvisor LLC
See all 144 reviews
Nearby Hotels 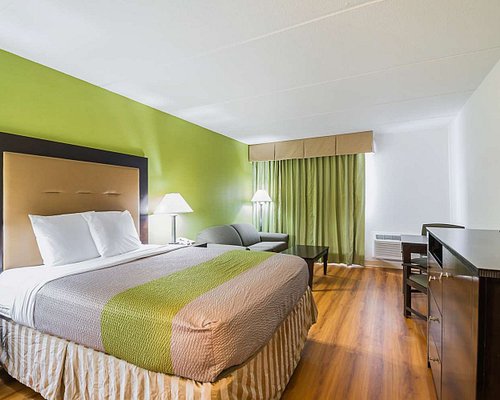 Taking safety measures
We compared the lowest prices from 17 websites
Courtyard Hartford Manchester
US$ 94
US$ 86
Booking.com
View Deal
Courtyard
US$ 86
Agoda.com
US$ 86
getaroom.com
US$ 94
View all 16 deals from US$ 86
130 reviews
3.2 km from Holiday Inn Express Vernon-Manchester

We stayed here for 13 nights over Christmas & New Year while visiting family in Connecticut. The room was large, clean & comfortable with a king sized bed. Initially I was concerned about the room smelling of stale food as it had a microwave and fridge but it was completely smell free much to our relief (we had previously had a bad experience at Extended Stay America where the room was uninhabitable!). The decor is dated and for some reason the unit with the fridge, microwave & TV on was propped up by ceramic tiles but this was just a minor negative. The bathroom was quite large with a bath & shower, there was plenty of hot water so no fear of it running cold on you. The small negative in the bathroom was that the toilet seat wobbled when we sat on it. The heater in the room worked really well & kept us nice & warm when the temperature outside was freezing.
The staff were very welcoming and there was a reasonable selection of breakfasts although it was the same things everyday but enough to be able to change if you want to. Sarah worked hard to make sure there was enough food & always greeted us warmly.
There is Denny’s Diner just across the road within walking distance if you need food at any other time of the day and a Stop & Shop just up the road for other supplies.
All in all we enjoyed our stay very much and wouldn’t hesitate to book here again.

While traveling from Chicago to Vernon, ct, some family and I stayed at this holiday inn express! I can’t say enough about the good service, front desk always helpful, they had a really good breakfast downstairs, would stay there again in a heartbeat! Also, really liked the coffee, my granddaughter really liked the waffle maker, Cathy from fox river grove, I’ll.

Update: Bed bugs. We awoke in the morning with bites all over our backs and legs.
At breakfast, the woman who serves the food, Caroline, was actually picking her nose. They would start cleaning and vacuuming the breakfast room while we and others were still eating. Many times they would leave the vacuum cleaner on, right next to us, while cleaning the other side of the room just to harass us. They would even make rude remarks to us as to why we were working in the dining room and not in an office! Many business people use the room throughout the day for meetings and to use their computers and while having access to the 24 hour coffee.
Could not believe that this was a Holiday Inn.
A handyman, just before quitting, showed us where the rooms are full of mold and bacteria.
We also found out that they have a staff turnover of over 90 percent because the owner Victor, is preoccupied with other properties and allegedly suffers from several mental disorders.
The only plus is the location. But that is not worth having bed bugs bite you, getting sick from the mold and being exposed to drug deals across the street at the Free Spirit bar. Often you will see police in the lobby searching for criminals. Having a law enforcement background I once asked what was going on. It's called situational awareness. We were told to mind our own business.
The owner will spin and state that this is a fake, negative review by guests who spent thousands of dollars in cash at this highly overpriced motel and were evicted. Our response: name the guest. Ask for Danny the handyman who just quit, or Zach, Diane or Nikki who worked the front desk. Where are they? Better yet, go to the Vernon Department of Public Health and review the warnings and citations this bed bug infested motel suffers from. How about their policy of anti-semitism which was clearly stated to us with the hotel's ban on Kosher inspection workers who come up from New York?
Or the letters sent by the owner to the local US post office requesting that the mail carriers stay off the property because they grabbed a cup of coffee and used the public rest rooms? Not a friendly environment. There is so much more. We deal in facts. Maybe the IRS should investigate why we were asked to pay in cash.
This is not a safe environment. We advise to stay in a nearby Marriott or Hampton Inn.

A seamless and remarkable journey is what we're aiming to give our guests. It's great to receive feedback from our visitors. I truly appreciate your effort to share yours, and for spending your time with us.

I'm concerned that you felt discomfort, and that you weren't comfortable with the upkeep of our property. We're all about bright experiences, and I'm worried that our staff service fell below your par. The review of our visitors helps us in creating action plans for improvement. I know for a fact that yours can help us in making enhancement programs, which is why I'll be conveying yours to our upper management. Kindly check the private message that I sent you.

I hope you'll reopen your door for us so that we can have the chance to have a second bite of the apple, and prove that we're an engaging place to rest.

Report response as inappropriateThank you. We appreciate your input.
This response is the subjective opinion of the management representative and not of TripAdvisor LLC
Charlene S
Charlotte, North Carolina
1813
Reviewed 5 October 2019
Great staff! Comfortable rooms.

Well maintained property and comfortable beds. So happy with the staff! Had a problem with the remote not working and the front desk was at my door within 5 minutes, tried to fix it and when he couldn't because it was actually a programming issue on the TV, offered a whole new room. Amazing service!

This review is the subjective opinion of a TripAdvisor member and not of TripAdvisor LLC
rdeanHamptons_Ny
hamptons, ny
10622
Reviewed 24 September 2019
Needs updates.

We stayed one night. Upon an early arrival we were warmly welcomed and offered a room immediately. The hotel however seemed dreary and tired to me for a Holiday Inn. I was disappointed as the location is very good, but in dire need of updating. The sheets were very clean gratefully but everything else was well worn and dirty looking.

Thank you for choosing Holiday Inn Express Vernon-Manchester and for sharing your experience with us.

I would like to apologize for any inconvenience caused by the cleanliness of our room and the maintenance of our hotel. We will investigate this further with our team. It is very important for us that all our guests have a very comfortable and enjoyable stay as we strive to maintain a high quality standard of service at all times.

I will use your comments to improve our guests experience and hope to have the opportunity to welcome you again in the future.

Report response as inappropriateThank you. We appreciate your input.
This response is the subjective opinion of the management representative and not of TripAdvisor LLC
View more reviews
PreviousNext
12…24