It was a low season when we stayed there. We had a room with a view on the rural road. It was not so picturesque, but later we realized that it gave us a sense of privacy, in comparison to the ones which faced the swimming pool. Room was spacious and relatively clean :) We had a wi-fi connection right in the room. The hotel itself is 10-15 min walk to the sea. We enjoyed walking, so it wasn't a problem to us. There is a supermarket, bus stop and currency exchange in close vicinity.

See all 117 reviews
Nearby Hotels 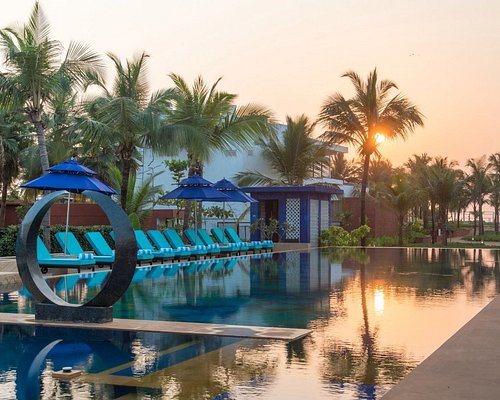 We (four friends) stayed in this property during March 2017. We got a better deal through Travigo and the stay was worth the money we spent (Without the deal, it would have been an expensive stay for the quality of service they offer). My recommendation is better to look for good deals on this property before booking. This property is a combination of a hotel, a swimming pool (a small one) and a restaurant in a very very small place on the Benaulim beach road. They are maintaining the pool well. Rooms are cozy and ACs are working fine. But for the torn towels that they provided, everything was a good experience for us at this hotel.

Sir, thank you for the feedback regarding the linen. We are glad to know that you had a good stay at our hotel.

Report response as inappropriateThank you. We appreciate your input.
This response is the subjective opinion of the management representative and not of TripAdvisor LLC
MITCHpl
leics
301201
Reviewed 17 March 2017
Rooms not secure! Possibly the worst place I have ever stayed. AVOID.

OK so, the main reason I chose this was that it had a pool. After a week in a beach front cabin Id already decided I needed a pool.

Id even read the TA reviews and decided this place was going to be ok. I booked by accident, 5 nights, one more than needed. They werent interested in helping me get a refund. Poos customer service and unsafe rooms as far as security goes in my opinion.

Now, at checking no one was there. I went to the restaurant, was told rather abruptly that the hotel was nothing to do with them! So, whole a resturant is onsite its not connected. Well thats me NOT using that then during my stay.

After around a 10 min wait I got checked in, the formalities of copying my passport an filling out the register. I stayed on the second floor. Place was full apparently. So I got in the room, the door lock was inadequate. The TV was broken the fridge absolutely stank and the wardrobe doors were broken. Plus the walls and doors were grimy and dirty. My balcony view was that of a rubbish tip on the plot next door. The bedclothes had rips in them too.

I complained about the TV, it never got sorted. I sorted it myself, the coax cable had detached itself and the TV needed tuning. During the 2nd night the AC broke. I complained, was advised "we will take a look tomorrow." I couldn't change rooms
as the place was full.

There seemed to be a few Brits and a lot of Russians. The Brits who I spoke to raved about the place saying how nice it was. I can only guess their standards were a lot lower than mine.

Security. NOW THIS IS IMPORTANT - And my sole reason to advise not to stay. The door lock was insufficient. The handle was packed out with cardboard. The balcony sliding door was a joke. Totally insecure. BUT THE WORST, behind the smaller bed next to the bathroom there was a small window behind the curtain which was drawn. The window was left open. A thief could quite easily have climbed up outside and popped in/out through that window undetected. It was as if it had been left and hidden behind closed curtains deliberately.

So i had to carry all my valuable documents with me at all times and daily i locked my solid Samsonite case and chained it to the bathroom plumbing. I did not incur any losses. Thankfully.

The walls of the room were dirty and grubby. The general decor of the place was run down. The best feature was the pool. The sunbeds were worn and grubby. Tiles missing from the pool.

When I asked to speak to the manager i was told - there is no manager we are all the same!"

So, by Indian standards it was probably OK, by international ones, it wouldn't make the rating scale. I didn't expect 5 star but i did expect cleanliness and security.

Finally. The WiFi. Total garbage. Only works in the reception area. Slow.

DO NOT stay here. Find alternatives.

Room tip: If you HAVE to stay get a pool view room otherwise stay somewhere else
Ask MITCHpl about Star of the Sea Holiday Resort
3  Thank MITCHpl

This review is the subjective opinion of a Tripadvisor member and not of TripAdvisor LLC.
castlecolchester
Colchester, United Kingdom
2813
Reviewed 9 March 2017 via mobile
Regular customers treated like dirt

Stay at SOTS many times. Booked for this year as usual. Reserved room as we left last season and left our usual box of holiday equipment with the staff. Phoned to confirm arrival time and told booking cancelled- two weeks before we traveled. No excuse, apology or reason. Management of the accommodation must take the blame. When we did arrive in Benaulim, which we love, we went and met the owner - Dr E Vaz. Again no reason given, all he could say was he was so sorry!! I hope he gets the same treatment when he books his next hotel.

This review is the subjective opinion of a Tripadvisor member and not of TripAdvisor LLC.
Barbara H
Bolton, United Kingdom
8265
Reviewed 7 February 2017
Comfortable stay

Sir, thank you for the feedback regarding the sunbeds. Will surely try to place some more around the pool. We are happy to know that you had a good stay and enjoyed the food at our restaurant.

Report response as inappropriateThank you. We appreciate your input.
This response is the subjective opinion of the management representative and not of TripAdvisor LLC
Akash B
1
Reviewed 6 November 2016
Excellent stay

The experience was really good. Really clean and neat rooms. This was the second time we visited. The hotel is around 1 Km away from the beach. Ideal for walking too, although a bike or a car would be good. One negative was that the hotel staff is a little partial and biased towards foreigners. Benaulim beach is really peaceful, unlike colva or Calangute, Near the beach, there are a lot of shacks and restaurants. And But the hotel stay was really good and peaceful. I would like to visit again :)

Room tip: Have/Hire a bike/ Bicycle or car to travel to the beach.
Ask Akash B about Star of the Sea Holiday Resort
Thank Akash B

Dear Sir,
Thank you for your feedback. We are happy to know that you enjoyed your stay at our hotel. We look forward to serve you again.