Pleasant stay and right on Sudder St.
Close to the Indian Museum and New Market. The breakfast options are adequate and healthy. Staff are all very helpful and a accommodating.
A great place to base yourself in this bustling glorious city. 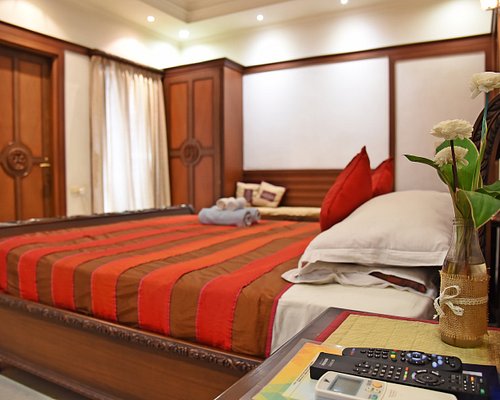 I stayed at Lytton hotel for 3 nights The hotel is in the center of Kolkata and streets around are full of restaurants and shops. The room was comfortable and quite big, but the bathroom was not very clean and sanitary tubes were rusty and dripping. Breakfast was rich of Indian dishes but poor of international food.

This review is the subjective opinion of a Tripadvisor member and not of TripAdvisor LLC.
Mavis57
Shoreham-by-Sea, United Kingdom
14262
Reviewed 3 December 2019
Traditional style hotel close to the India Museum

Rather dark old-style furnishings, air conditioning that is all or nothing, so either full blast and freezing or warm, damp and fusty. The lavatory poured water onto the floor every time it was flushed - the plumber came every time I complained and put some more gunk onto the pipe but it did not stop the torrent.
The worst part of this hotel is the absolutely deafeningly noisy nightclub situated on the ground floor. It has neon flashing lights as well as such loud "music" thumping away that the floor in the restaurant was shaking and vibrating and it was impossible to eat in the restaurant during the hours of operation of the nightclub, as you could not sustain a conversation. I complained more than once and was simply told that it would stop at 2330!! What made it worse was that this was the only place you could get a drink as they do not serve alcohol in the restaurant, or you had to order room service.

Room tip: Ask for a floor as high as possible to minimise the noise pollution from the disco
Ask Mavis57 about Lytton Hotel
2  Thank Mavis57

This review is the subjective opinion of a Tripadvisor member and not of TripAdvisor LLC.
13marc1313
11
Reviewed 26 October 2019
its a shame

Very disappointed with the employees and the owner. They refused to let a poor man eat at our table even though we wanted to pay for his meal. We are a group of 20 Canadians on a humanitarian trip and discrimination is not part of our values. We will never come back!

This review is the subjective opinion of a Tripadvisor member and not of TripAdvisor LLC.
rhayon94
Dhaka City, Bangladesh
3013
Reviewed 17 April 2019 via mobile
Short comfortable stay

Stayed there for 2 nights. I have been visiting kolkata for so long. Hotel is located at very happening area. Lots of restaurants, street food cart available nearby. 2 minutes walk to new market. Hotel is old but well maintained. Breakfast is not great but ok.

This review is the subjective opinion of a Tripadvisor member and not of TripAdvisor LLC.
jewel_khan06
Perugia, Italy
32
Reviewed 20 January 2019 via mobile
Best hotel in kolkata , we was 4 night , everything was good. specially brackfast very testy indian food , i will say gd

I recommend about this hotel, withe family best, if anyone want good hotel , you can go there ,