Review of Kempton Hotel
Reviewed 3 May 2019 via mobile

Kempton offered the best value stay experience for the following reasons:
1. Rooms - nice and very clean
2. Prices - affordable and value for money
3. Restaurant - the food is incredible and the Indian kebabs are a must try
4. Staff - always friendly and helpful. Even arranged for Uber and transport pick ups
5. Location - it is at Marquis Street which is within reach of New Market and Park Street, ideal shopping hubs in Kolkata.

Would recommend for sure if you’re looking for a value-for-money and comfortable stay at Kolkata.

Trip type: Travelled with family
See all 208 reviews
Nearby Hotels 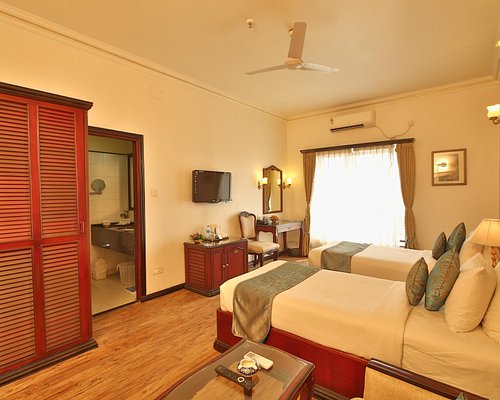 Stayed there for 5 nights. Checked in around 9 pm, ager checked into the room, i was surprised as the room was very small. I stayed in the executive room, deluxe and standard rooms are smaller than this room as the hotel staffs said. The room looked big in the internet but in reality not the same. One thing about kolkata city center hotels, the buildings ater old, as a result, the rooms lok very tired so I decided to stay in a comparatively new hotel so I decided to stay here. Room and furniture doesnt look old but rooms should have been a little bigger. A lot of known people said to me, other hotels are cheaper and got big rooms. Another problem was, the pillows. Pillows are old and they are semi flat. Souls be changed.
The location was nice. Near to new market, but not five minutes by walk as they say, u have to walk at least 15 minutes to get there. But recommendable if u don't like tired hotels of kolkata, stay here.

This review is the subjective opinion of a Tripadvisor member and not of TripAdvisor LLC.
TasiraS
Oslo, Norway
14452
Reviewed 11 March 2019
Clean, Comfortable, Right Priced

I must say that this place exceeded my expectation. We arrived very late, but still got excellent service at the dead of the night. Rest of the stay was good too. I guess I will be back to this place if I stay in that area of Kolkata again.
The restaurant was really really good for Kebabs and Bangali food. Enjoyed the meals thoroughly.

This review is the subjective opinion of a Tripadvisor member and not of TripAdvisor LLC.
tareqimtiajsifat
New York City, New York
113
Reviewed 3 March 2019
Cozy and Comfortable hotel

This hotel is in good location, room service is good, staffs are friendly and helpful, their buffet breakfast is delicious specially the desserts item. The metro station that is adjacent to hotel is Esplanade metro station. The deluxe room that we took was nice, the bed was comfortable. And there is another aspect that I liked most, that was various paintings hanging on the wall in each and every floor of the hotel. They were so nice and I spent a good amount of time seeing the paintings.

This review is the subjective opinion of a Tripadvisor member and not of TripAdvisor LLC.
John L
Stanley, United Kingdom
9540
Reviewed 17 February 2019 via mobile
Beautiful Hotel. Friendly, helpful staff.

This was our first hotel, when we arrived in India. And it set a very good tone for our visit. The room was clean and fully functional, but not remarkable. However everything else about this hotel was truly remarkable. I particular the restaurant was exceptional. Evening meal wss as delicious as any food I've tasted in India and cost only about 1000 Rs (£11) fof two people. All the hotel staff, but particularly the restaurant staff, were most helpful, respectful and friendly.

This review is the subjective opinion of a Tripadvisor member and not of TripAdvisor LLC.
ziauddink2017
Dhaka City, Bangladesh
2230
Reviewed 5 January 2019 via mobile
Good Affordable Hotel

Stayed here at the very beginning of 2019. Good comfortable hotel at an affordable price. Excellent location for exploring Kolkata and it's famous spots. Taxis are easily available and metro is not too far away. Staff are friendly and helpful.
The buffet breakfast hall can get very crowded around 9 so get in there early. The staff can sometimes be overwhelmed.