$28
Free cancellation until 27/05/22
Reserve now, pay at stay
View deal
Destinia.com
StayForLong
Prices are provided by our partners, and reflect average nightly room rates, including taxes and fees that are fixed, known to our partners, and due at time of booking. Other miscellaneous taxes and hotel fees which are not fixed or due at time of booking may be payable at the property at time of stay. Please see our partners for more details.
NagarajaRaoM
Chennai (Madras), India
3

I stayed for a night at this hotel near to the airport.

Slightly far from city, but could complete all my official work and a good night stay for tiring day, with good cuisines for dinner both veg and no veg.

See all 202 reviews
Nearby Hotels 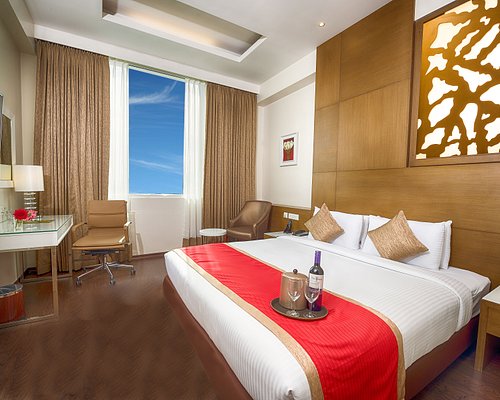 Poor AC at the Banquet venkatesh Mahal hall, which is at basement, we requested the owner himself to switch on the AC but that did not work. The GM is not customer oriented. The fresh room is located on another floor, not disable and senior citizen friendly. Hence a piece of advice to look out for other options in banquet Hall booking

This review is the subjective opinion of a Tripadvisor member and not of TripAdvisor LLC.
sweetyjohn2015
21
Reviewed 13 January 2019 via mobile
Mr. John Bosco

The hotel is well situated very clean and very good buffer spread at a very reasonable price. More importantly the staffs are so polite and so friendly. They were very helpful throughout. This is my 3rd stay in last 2 years and found to be more customer friendly as days pass. All the bestTeam.

This review is the subjective opinion of a Tripadvisor member and not of TripAdvisor LLC.
teshwar
1
Reviewed 25 December 2018
Terrible!!!

I stayed here for a night. I checked in around 6.30 pm a few weeks ago on. Saturday and checked out at 6 am the next day. The check in process was terrible. Had to wait in the lobby sweating for 10 minutes. First the assistant was chatting away with another guest for a long time and then he fumbled around to find my booking for another 5. The lobby was warm and no sign of air-conditioning.

I settled in and went for a quick shower. On finishing my shower I found there were no towels. I called house keeping and told them that I needed towels fast as I was dripping wet after the shower. I had to call once more and got towels after a wait of more than 5 minutes.

While I was on my way out for the evening I complained about the towel issue and there was a manager who had the audacity to tell me that the towels would have been placed on the bed. I would have accepted a simple expression of regret but this idiot made it seem like I was not looking for it in the right place. Well, I did look everywhere in the room.

I came back and wanted to catch some EPL football action but the hotel did not have the Star Sports channels that showed the matches. I had exhausted the data on my phone and asked for the WiFi password and found that they have free internet only for 15 minutes.

As I was planning to leave first thing in the morning, before I went to bed, I settled the bill for a bottle of water I had asked for not knowing that it was chargeable. They did not have change for Rs. 200 and thankfully accepted to charge my card for Rs. 47. The assistant told me he works and the receipt for the stay to my room. I told him I wanted to sleep and he should make it fast. After ten minutes, I had to call again and a few minutes later I got it.

This review is the subjective opinion of a Tripadvisor member and not of TripAdvisor LLC.
cpjqm
Bengaluru, India
345
Reviewed 24 December 2018
Located in a calm neighbourhood

My stay was in end October and beginning of November on work. I found the service was good. The room was clean and so was the linen, both bed and bath. The dining was tasty and the range was suitable for a wide spectrum of guests. The rooms are silent to work in and the amenities are minimal. The location is good and many shopping areas are nearby. One can try other restaurants nearby if you want larger range of cuisine. The breakfast is a buffet which is good.

This review is the subjective opinion of a Tripadvisor member and not of TripAdvisor LLC.
Getaway22008317394
11
Reviewed 19 December 2018 via mobile
Awesome service & good location

Vijay park inn located near Brooke filed mall that's very comfort for me.
I was stayed in that hotel last week(11.12.2018) for official purposes


they given best service & tasty food. Especially front desk staff are given warm welcome with smiling face...
thank you so much

This review is the subjective opinion of a Tripadvisor member and not of TripAdvisor LLC.
View more reviews
PreviousNext
1…345…