What a beautiful property! We reached on 1st December had booked Haveli and deluxe room for one night, Mr. Mahender Singh was super kind to us and upgraded us to Super Deluxe rooms free of any additional cost. Probably the best rooms on the property with balcony and a splendid view. Immediately, we decided to extend our stay by one more night and again, we were given the same rooms(super deluxe)at the same cost we booked (Haveli plus deluxe room cost) The property is huge and the staff was very polite, helpful and we had the best time! Special thanks to Mr. Mahender.

See all 968 reviews
Nearby Hotels 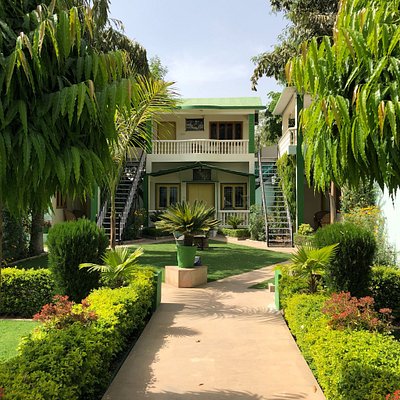 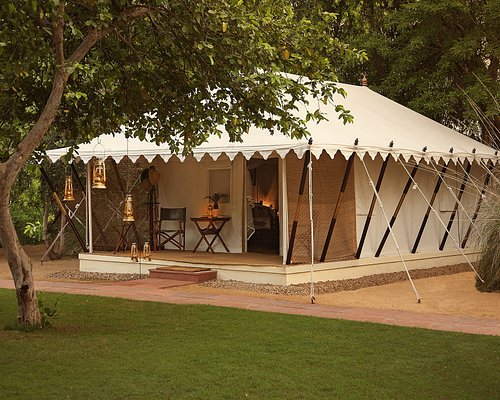 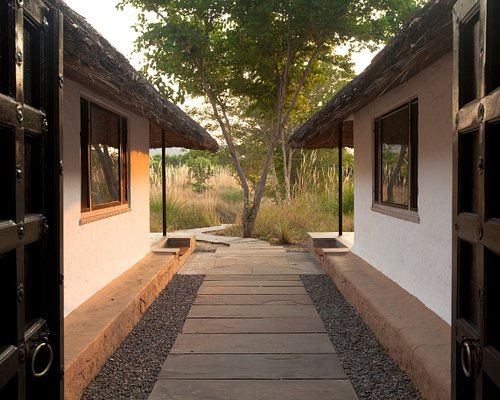 Stay was excellent, food quality i would say is pretty average with not much a variety. The owner of the property showed very poor taste by yelling at us and my son for him basically hanging on the marble border by the pool (in his words it was a jaali which will break) - which was not abnormal as that was a strong border. If he has such issues then he shouldnt be allowing any guests or children. His behaviour was really poor in light of his calibre and i would never ever go back to such a property where the owner behaves in such an in appropriate manner!

Thanks for your valuable feedback but would like to clarify to our fellow travellers who stall be reading this about the incident which happened as you have blamed it to the owner where it was your wrong doing.
The hotel main Swimming Pool (Hathi Kund) which it self an architectural jewel is a swimming pool with marble carved panels, railings and is built on a step well concept.(for picture reference please see the picture on our website).
Marble is a fragile stone and the railing (jaalis) are not meant to be hanging on and are just used as a railing. You cannot take a chance as the stone railing weighs approx 50 kgs and if it falls one can seriously get hurt. As you were with your child it was your responsibility & duty to make sure he was not hanging on it as he should been under your supervision. The owner had to shout as he was at a distance and if he wouldn’t have done so then it would have been too late which could lead to a situation you didn’t want to be in. Also, when you heard the owner (not realising he was the owner) answered in a rude tone saying “Kya Ho Gaya” (What has happened). You should have thanked him instead who saw your child hanging on the marble railing (which is fragile) and reacted at once before it was too late.
Also, would like to clarify you are paying for your stay only, not paying to damage hotel’s property.

Report response as inappropriateThank you. We appreciate your input.
This response is the subjective opinion of the management representative and not of TripAdvisor LLC
alokjayakar
Mumbai, India
3012
Reviewed 2 weeks ago via mobile
Absolutely perfect, besides one big blemish

The property itself is sprawling and very well maintained. Beautiful rooms, extremely helpful staff (special mention to Rajveer who can literally sort anything you need) and great food.
The only drawback is the single use plastic bottles for drinking water.
It's unforgivable for any hotel to be so wasteful especially when the solution is simple and cost effective
I really hope the next time we visit I don't leave with the guilt of creating a heap of waste

This review is the subjective opinion of a Tripadvisor member and not of TripAdvisor LLC.
rajeshmH9243RP
23
Reviewed 3 weeks ago via mobile
Review of our stay in this hotel from 22nd Dec 2021 to 25th Dec .

One of best hotel where I stayed for three days with my family .
Excellent food , very good room .
Good housekeeping .
Well behaved staff members .
They have tried level best to maintain Indian tradition .

This review is the subjective opinion of a Tripadvisor member and not of TripAdvisor LLC.
anandmishrajpr
Jaipur, India
152
Reviewed 3 weeks ago via mobile
Nice wedding destination

Nahargarh palace has a nice setting with beautiful greenery all around it. The food is nice.rooms are spacious with simple interior. Staff is good. The resort is near to the forest gate which makes it very convenient for early morning line up.

This review is the subjective opinion of a Tripadvisor member and not of TripAdvisor LLC.
Manish882
Asansol, India
33
Reviewed 3 weeks ago via mobile
Nahargarh Ranthambore Experience

Infrastructure is nice, but the staffs are very much rude and manipulative & not at all courteous. They are expert in raising charges without informing the guests. I was charged for an extra kid of 7 years without being provided the extra bed and without informing at the time of check in.

Moreover food is not good and while ordering for a Cheese Grill Sandwich I was replied that it will take 45mins as they are busy preparing Dinner.

Attached herewith is the written Complain made to the Hotel Management.

Dear Sir,
Thanks for sharing your feedback with us, we shall take this matter seriously but would like to clarify to our fellow travellers to what had happened and why you have mentioned about the staff being rude etc. First of all, would like to inform you that information for charges for extra kid above 5 years was informed to your travel agent Tamarind Global who should have informed you. You can check with them if you do not believe us. Secondly, when you checked in we spoke to the agent who said extras to be charged directly as you had not paid to the agent for the same.
We charge for an extra person or kid above 5 years irrespective of the fact if you do not ask for an extra bed hence we had to ask you to pay once we got instructions from the agent. Also, at last i would like to point out we charged you only for a night for extra person seeing at the situation that we could not inform you during check in.
Lesson learned from this is do not check in guest if you do not receive payment before check in but would like to let you know we care for our guest and we discuss issues like this when possible during the stay on the same day of checkin.
Fellow travellers should also know the way you behaved when this was informed to you in the most inappropriate behaviour by a guest.
Rest it is self explanatory and don't need to give any explanation to it.
Thanks for your valuable time.
Regards

Report response as inappropriateThank you. We appreciate your input.
This response is the subjective opinion of the management representative and not of TripAdvisor LLC
View more reviews
PreviousNext
12…