Best Resort in the Galapagos!
We just returned from Finch Bay and had the trip of a lifetime!
We were a group of 9 - 2 families traveling together.
We cannot say enough about the resort and the staff. The location was ideal, you can stroll right to the beach.

The exceptional staff: Soto, was our private guide for our tours) was amazing so good with our kids and very knowledgeable about the Island and the Wildlife,
Resort staff: Christian, Grace to name a few and all the other amazing staff members were second to none.
Due to the Covid pandemic they are very meticulous regarding protocols and we felt extremely safe.

Do not wait now is the time to visit the Galapagos!More

Your review is very important to us; thank you for taking time out of your day to write it. Travelers continue to choose the Finch Bay Galapagos Hotel because of our unbeatable location, superb service, food, and amenities. Plus, our private Yacht Sea Lion proudly stays at the forefront of island exploration and wildlife observation!

We are very grateful for your feedback and look forward to hosting again!

Report response as inappropriateThank you. We appreciate your input.
This response is the subjective opinion of the management representative and not of TripAdvisor LLC
See all 1,138 reviews
Nearby Hotels 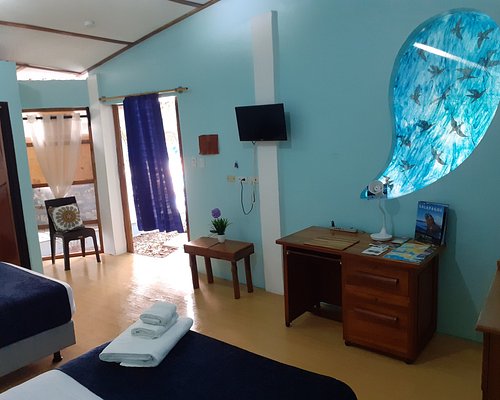 Best place to stay in Galapagos for a great time with access to many adventures nearby. Staff is great and the hotel is modern, clean and relaxing! I recommend the daily yacht excursions from the hotel and the walk to Geitas.

Thanks for sharing about your recent trip to Galapagos and visit to Finch Bay Hotel. Thank you again for your comments, and for coming in, and we hope you’ll give us another chance sometime in the future.

Report response as inappropriateThank you. We appreciate your input.
This response is the subjective opinion of the management representative and not of TripAdvisor LLC
SFSERRANOM
41
Reviewed 26 March 2021 via mobile
The prime luxury is the people of the Fintch

After a dificult year we came to the Fintch Bay for a few days with the family, we could not have made a better choice, the hotel is beatifull, but that falls short to warmth & service of the people. The location, the Island Paradise, The Fintch, and their people is a must bucket list in anybodies life!!

Your review is very important to us; thank you for taking time out of your day to write it. Thank you for choosing us.

Report response as inappropriateThank you. We appreciate your input.
This response is the subjective opinion of the management representative and not of TripAdvisor LLC
208saric
1
Reviewed 19 March 2021 via mobile
AMAZING EXPERIENCE

Hi! From the very beginning, I worked with Carmen planning my reservation and the entirety of our itinerary. I was traveling with my mom and we were taken care of from dealing with the steps and the processes in the Guayaquil airport up until the very end when we were escorted from the hotel back to the airport at the end of our trip. The hotels service was outstanding, and they were extremely accommodating considering our food and dietary needs. Naa, the manager, Vanessa, the chef Andres, servers like hector and Christian all made sure to be on top of our needs and to do anything possible to ensure we were comfortable. The finch bay activities are well worth it and they take care of everything for you. Working with them was so easy, and they never said no, everything was always a YES. Our trip was 1000 times better bc of the hotels service and accommodations. The one downside of going to the Galápagos in general (not necessary having to do with the hotel) was that in March it was rainy season and when it rained for like ten minutes a day, many of the bugs came out. Besides for that it was spectacular.

We were delighted to read your review! Our focus is to provide the full experience that comes with the title of Expedition Hotel. We are very grateful for your feedback and look forward to hosting again!

Report response as inappropriateThank you. We appreciate your input.
This response is the subjective opinion of the management representative and not of TripAdvisor LLC
michaelpA1887GK
Salt Lake City, Utah
922
Reviewed 17 March 2021 via mobile
Excellent

Despite a nearly 4 hr flight from quito (including the 1 hour layver in guayaquil), a short boat ride from baltra airport, a 40 minute car ride to the santa cruz pier, another short boat ride to the dock near the hotel and a final 5-10 linute walk to the hotel, I would say that going to Finch Bay Galapagos was well worth it.

Service: This is where the hotel really shines. From designating a person to guide you through the complicated process at quito airport to the front desk person greeting you by name, Finch Bay makes sure that you feel pampered throughout your entire stay. They also have a yacht for interisland travelling and booked other tours outside of that.

Food - Honestly, I wasn't expecting a lot but the restaurant and bar of this hotel exceeded all my expectations. Everyday I told myself that I was going to try other restaurants and bars but each time, I realized that I might just be disappointed when I compare it to the level that the hotel provides. Even though the hotel prides itself in being sustainable (which is another laudable matter), it didn't sacrifice the quality of food and drinks that it produces. The drinks are both complex and thoroughly thought out and the food is just magnificent.

Room - If there's one thing that I was initially taken aback, it was that the rooms were on the smaller side. The hotel stresses about being eco-friendly and sustainable and this can be felt throughout the resort and in the room. They provide you glass jars for water instead of plastic bottles. The hot water in the shower sometimes goes cold which I'm not sure is intended or just a feature of being an island hotel. I guess being carbon-neutral has its compromises. The bed was very comfortable though which was very welcome after excursions and activities.

Pool - Just gorgeous. It's also apparently heated by solar energy. Birds frequently hang around nearby and provide a very in-nature ambiance. There were also enough lounge chairs throughout the day.

Value - I would say that the rooms are on the higher end though I've read everything in galapagos is expensive. Food and drinks are priced like you're in the US but to be honest, I would argue that I would pay more if they served the same quality to me back home.

Dear guest,
Thank you for taking the time to write a review. We take great pride in our service and staff members, and are happy to hear our standards have been kept. Staying at the Finch Bay Galapagos Hotel is getting the world-class treatment. We hope you come back and enjoy our excellent service! Looking forward to your return!

Report response as inappropriateThank you. We appreciate your input.
This response is the subjective opinion of the management representative and not of TripAdvisor LLC
ovqgye
Guayaquil, Ecuador
4747
Reviewed 8 March 2021 via mobile
Great hotel

Finch Hotel in Galapagos is simply a great experience overall!! Food, location, facilities and great service from all the staff!!

My family had a blast, from great rooms to amazing breakfast and again the great staff!!

In front of the hotel is los alemanes beach, lots of nature, you can’t ask for anything else!!

Hotel had boats to take you to town.

Come to Finch, you will find all the great experience!!

Dear guest,
We were delighted to read your review! Our focus is to provide the full experience that comes with the title of Expedition Hotel. Travelers continue to choose the Finch Bay Galapagos Hotel because of our unbeatable location, superb service, food, and amenities. Have a great day.