Average Hotel, no plus points - Review of V Hotel Lavender

Average Hotel, no plus points

I stayed there for 4 nights in V Hotel Lavender. It was really a average hotel. Quite expensive and no complimentary services.

Just above the Lavender Metro station, nothing else. Even we found difficultly to locate it.
Service and hospitality was poor. Even if you want to pick/drop your luggage from reception to your room, surprisingly you have to pay for it.

I will not recommend this hotel for your stay..

Room tip: No idea... I can saw only Residential area...
See all 4,878 reviews
Nearby Hotels 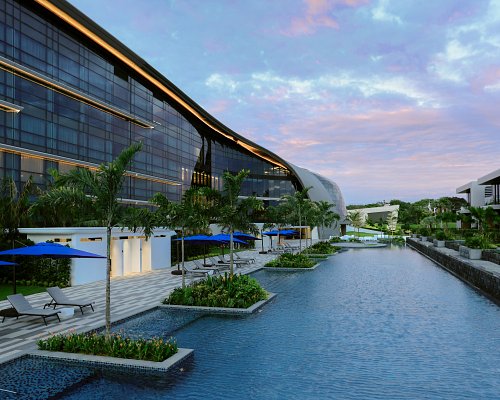 Taking safety measures
We compared the lowest prices from 11 websites

We were on our honeymoon trip to singapore , we stayed from 14feb-17feb 2012 in Premier room,
checkin was smooth without any waiting, rooms are compact but very neat & clean, Premier room provides excellent view , you have option for city view or river view , the best thing about hotel is , its location, its just above the Lavendra MRT station which makes easy to roam in the singapore, staff were polite and took care of our need. Breakfast they serve were average , I will advice you to take rooms without breakfast as many restaurants are just below the hotel serving gr8 food at very lower cost than the hotel that too 24x7 , hotel has pool on 1st floor near restaurant.

Room tip: Ask for rooms on higher floor for gr8 views and ask for rooms which are away from lifts.
Ask yatin2525 about V Hotel Lavender
2  Thank yatin2525

This review is the subjective opinion of a Tripadvisor member and not of TripAdvisor LLC.
livingnowSydney
Sydney
1724
Reviewed 1 August 2012
good for short stay

Stayed for one night while in transit. No problems at check in or check out. Very convenient location with MRT station and 24 hr food outlets underneath. Nice pool. Rooms are small and so is the shower however ok by Singapore standards and for the price.

This review is the subjective opinion of a Tripadvisor member and not of TripAdvisor LLC.
Robs-au
Sydney, Australia
2524
Reviewed 31 July 2012
Gets the basics mostly right

Bit of a mixed place. I stayed here as part of a Singapore Stopover Holiday (the Singapore Airlines deal).

I didn't have issues at reception that others have had. The reception was always fully staffed that I saw, yet when I arrived in the early evening there were fewer guests checking in so was served immeadiately and quickly. I left very early in the morning so expected that to be quick, but was shocked to find a full complement of staff then, too. I've never seen a hotel with so many reception staff on duty. This said I did notice during my stay that there are times when masses of people seem to come at once... I'm not sure what the hotel can do about this more than they already do.

The room - anyone who thinks it is tiny doesn't know what a tiny hotel room is. These aren't American-sized rooms but there's plenty of space for your luggage, a cupboard if you want to use it and room to move around the bed. There's a desk as well. The bathroom is the same deal - you can't have a party in there, but it's NOT tiny either. It does the job. The hotel is quite new so everything is fairly modern. Most importantly, the air conditioning works, though is not quiet. The hotel floor plan is an H-shaped layout and my room was one of the inside legs of the H so I had no view of any note.

The pool is outside - again nice and modern, but there's limited scope to change down there. There's an outside shower and some private showers, but I didn't see any kind of actual change room. Singapore's hot enough to dry off quickly though and you can just go back to your room to change.

Location is great... plenty of food options downstairs along with the MTR station to take you wherever you need to go. I didn't try room service, no need.

The only real negative I had was one day I came back from a full day out to discover that they still hadn't cleaned my room. They pressed the bell much later asking if I needed it done - fortunately I was just headed out for dinner, but is seemed rather ridiculous - I was out more than long enough during the day for them to have cleaned the room then.

Nothing to do with the hotel but just a tip - the SSH transfers to/from the airport were utterly, utterly hopeless. When you arrive, if one's not ready to go, forget about it and get the train. They told me it would be 20 minutes, it took about 35 to show up and then wasn't especially fast. Had I taken the MTR I would already have been at the hotel. For my return, I and others waited over 20 minutes beyond the organised pick-up time and when the guy showed up he had an empty bus so was not slowed down by previous stops and made no apology and not even an excuse. When he did drop us off he only dropped off at Terminal 2 though most of us were Australians getting their SIA flight from T3. Had to walk all the way through T2 to get the Airtrain then all the way through T3 back to the Singapore desks. Had I taken the MTR I'd have been at those desks in literally half the time and with a lot less walking! Moral of the story - the hotel is well located, just use the MTR and forget the clumsy transfers!

This review is the subjective opinion of a Tripadvisor member and not of TripAdvisor LLC.
mike t
Christchurch, New Zealand
36
Reviewed 30 July 2012
one thing says it all about our experence felt like we were in east germany

This review is the subjective opinion of a Tripadvisor member and not of TripAdvisor LLC.
Jmetcalfe1
Dubai, United Arab Emirates
516
Reviewed 28 July 2012
Not good!

Stayed at this for one night with our 3 children on our way back home to Dubai. Looked for a reasonably priced hotel in Singapore ( which is hard as Singapore is very expensive) and found this although not cheap!
The room was so small, the bathroom was tiny, the wifi was expensive and could only accommodate 1 device.
The reception was horrible, busy and the outside of the hotel was noisy with big vents booing air out. The one good point is that there is a metro outside.

This review is the subjective opinion of a Tripadvisor member and not of TripAdvisor LLC.
View more reviews
PreviousNext
1…559560561…