not bad hotel but bad position

this hotel is a good half hour by scooter out of town across a murderous motorway ? so , you will need a scooter which would be okay except the corrupt police will fine you every time they see you ( you will be targeted as a cash cow tourist )(by the police they're savage ) so you will end up playing a dangerous game of cat and mouse with these greedy stupid people who ultimately will be the death of pattaya an already stinking vile dangerous place or it will cost a fortune in taxi fares which means you will save nothing by staying here ?
the hotel itself isn't bad , large rooms cleaned daily nice big pool restaurant is okay although I wouldn't have breakfast hereMore

Hi,
Thank you very much for taking the time to write to us about your experience at Eastiny Resort. Eastiny Resort is located about 10 minutes away from the bustle and hustle of Pattaya. Guests that stay with us are those who prefer to be away from nightlife and the noise that Pattaya is famous for. If you prefer all the actions, you should look at other Eastiny Hotels. We have something for everybody! Thank you for taking the time to share with us about your experience. I look you re-visit us again soon.

Report response as inappropriateThank you. We appreciate your input.
This response is the subjective opinion of the management representative and not of TripAdvisor LLC
See all 21 reviews
Nearby Hotels 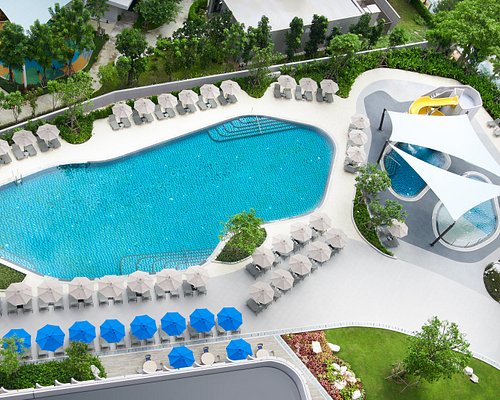 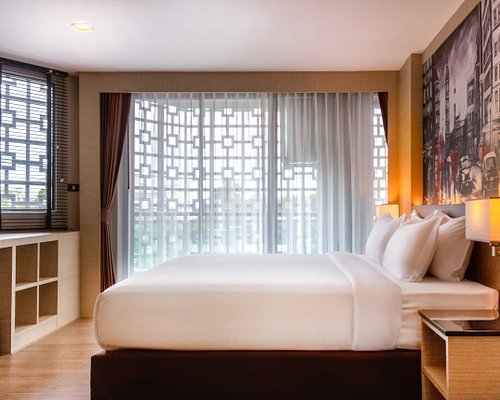 This hotel is an ideal stopover to get to ko Chang and the islands, we stayed for 1 week and was happy with our accommodation , room was clean and good size with good tv, aircon was leaking into room which had dirty water inside and stained my shirt, bathroom was good with hot water, room was cleaned every day. The pool was good size but murky water, food ok and staff helpful, gardens are very nice and tranquil. We are booking again on way back to Bangkok as price is very good for what you get

Richard r.
Thank you much for taking the time to write to us about your experience at Eastiny Resort. I am pleased to hear that you have thoroughly enjoyed your one week stay with us. I am glad that you have noticed the cleanliness of our rooms and other service attributes work wonderfully. I am pleased that you enjoy our 40 meters swimming pool. My team and I will work even harder to improve guest experience. Thank you again for your feedback.

Report response as inappropriateThank you. We appreciate your input.
This response is the subjective opinion of the management representative and not of TripAdvisor LLC
claudioz710
Bologna, Italy
308780
Reviewed 10 November 2017 via mobile
ok

this hotel is very big. with a big open swimming pool. Breakfast included. Not included wi fi--100baht x day. is very good for groups. restaurant ok. do not have espresso... Workers are ok. location is not in center town.

Hi Cludio Z.
Thank you very much for your feedback. I am pleased to hear that you thoroughly enjoy your stay. The swimming pool is a big deal for Eastiny Resort. The swimming pool is 40 meters long. Hence, it is slightly shorter than Olympic size. I thank you for your business. I look forward to welcoming you again next time you are in town.

Report response as inappropriateThank you. We appreciate your input.
This response is the subjective opinion of the management representative and not of TripAdvisor LLC
Spainie
London, United Kingdom
154
Reviewed 1 June 2017 via mobile
Never again

I have stayed many many places and have tried to be ripped off but this place wins hands down .. 1st they changed the booking from 4 to 3 night and it worked out more Man said he got price wrong and if I not pay diffident he would have to ... as this was going on the manager decided to slate me in thai ... not knowing my works thai translator we in the hotel lobby she apologised to me and was ashamed for being a thai ... and to add more they wanted to charge me for the FREE WIFI ... if you are not from Japan don't stay here ..!!!!

Hi,
Thank you very much for your feedback. I am sorry to hear that you had a bad experience at Eastiny Resort. I am pleased to update you that the resort is now under new team of management. I hope you give us another opportunity to serve you again during your next trip to Pattaya.

Report response as inappropriateThank you. We appreciate your input.
This response is the subjective opinion of the management representative and not of TripAdvisor LLC
karans445
53
Reviewed 2 January 2017 via mobile
The place should close down pretty soon

This place is big. I mean really big no doubt about it. When I booked this hotel agoda showed me free wifi. But there's a catch. Free wifi is only in lobby area. You have to pay for wifi per device 100 THB per day for access everywhere. So free wifi tag on agoda was misleading. Secondy their name says its a resort and spa. They have basic pool faciity whic doesn't exactly pass for a resort and the spa is closed forever so the name just doesn't hold any meaning. I tried to book a cab through hotel for airport and the staff said they can only book a cab 24 hours in advance which was stupic really as I booked a cab myself with little effort just 3 hrs before the flight.

Their room service only replaces the bedsheets the next day no room cleaning.

This review is the subjective opinion of a Tripadvisor member and not of TripAdvisor LLC.
YoungGun
Manchester, United Kingdom
4950
Reviewed 4 October 2016 via mobile
Value for Money Hotel

Stayed at the Eastiny Resort & Spa in North Pattaya for a four night stay before heading up to Udon Thani.

Booked a Superior Room with Double Bed in the South Wing via Agoda for about £20 per night, which included breakfast. With the location of this Hotel being a 15 or 20 minute taxi ride to the Centre of Pattaya, it seems to cater for Groups of Tourists [Chinese / Koreans] as a stopover before their next destination.

Regardless, our Room S212 was a more than average sized room with a Double Bed, Shower, Fridge, TV and a safe. The only disappointment was the lack of free WiFi, which you had to pay for at 100 baht per day.

With the mass of tourists in this Hotel, I did find it a bit noisy outside of the room early in the morning as the coaches departed.

We only tried the breakfast once, which we'd missed the Buffett so had to order from a set menu which was of good standard and offered a tradition ‘farang style’ cooked breakfast.

There was a big swimming pool which claimed to open between 8.00am to 8.00pm. We didn't use it as all the times we passed it the gates to the entrance of the pool were always locked.

I was expecting the location of the Hotel to be quite remote, but there were a number of restaurants and 7/11 shops within walking distance. There is also a big covered market nearby, which we didn't try.

Overall, good standard of Hotel at a good price for the short period that I spent in Pattaya.

Hi,
Thank you very much for taking the time to give us very constructive feedback at our hotel. I am pleased to hear that you love your stay at Eastiny Resort. I am pleased that you enjoy many service attributes that we provided. The location of our resort attracts those who wish to rest and relax. Our massive 40 meters outdoor swimming pool is what our guests loved. It is only a tad smaller than Olympic pool. Our food and beverage team members work hard to give you the heartiest breakfast. I am pleased that you enjoyed your meal. I thank you very much for your very constructive feedback. I will use these suggestions to enhance our services to you and other guests in the future. Thank you!