Basic, but good enough for a one-night... - Review of Hotel Santa Maria

Hotel Santa Maria
Hotel Santa Maria
Lowest prices for your stay
Lock in the lowest price from these sites
US$ 59
US$ 53
Free cancellation until 19/12/21
Reserve now, pay at stay
View deal
PricelineUS$ 57
eDreamsUS$ 53
CheapTicketsUS$ 59
TripadvisorUS$ 53
Agoda.comUS$ 53
StayForLong
View all 9 deals
Prices are provided by our partners, and reflect average nightly room rates, including taxes and fees that are fixed, known to our partners, and due at time of booking. Other miscellaneous taxes and hotel fees which are not fixed or due at time of booking may be payable at the property at time of stay. Please see our partners for more details.
Scott A
Barcelona, Spain
288

Basic, but good enough for a one-night stay

We stayed here for a one-night stopover in Praia. It's close to the airport, which was ideal for a late night arrival, and it's centrally located in town. The hotel is very basic but has all the amenities you'd need for a short stay. Rooms were clean, but dated. The staff was friendly and helpful.

See all 151 reviews
Nearby Hotels 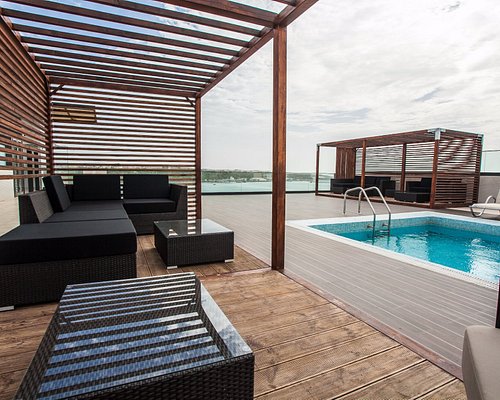 Breakfast included
Hotel Cesaria
Booking.com
View deal
Priceline
US$ 66
eDreams
US$ 61
Agoda.com
View all 6 deals from US$ 61
74 reviews
0.7 km from Hotel Santa Maria
We compared the lowest prices from 6 websites 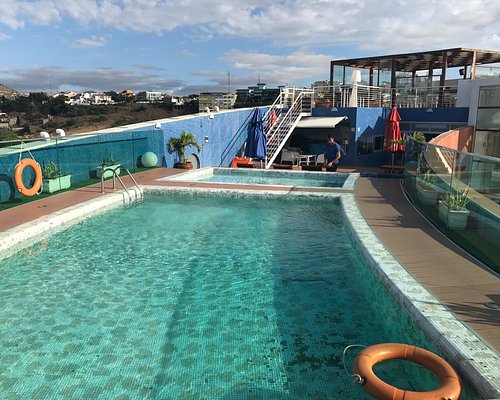 Expedia.com
View deal
Free cancellation
Pay up to 12X
Hotels.com
US$ 55
Orbitz.com
US$ 55
Travelocity
US$ 55
View all 9 deals from US$ 55
24 reviews
1.8 km from Hotel Santa Maria
We compared the lowest prices from 9 websites
Top Rated
Pestana Tropico
US$ 139

Expedia.com
View deal
Free cancellation
Pay up to 12X
Booking.com
US$ 153
Trip.com
US$ 126
Priceline
US$ 157
View all 15 deals from US$ 126
473 reviews
2.0 km from Hotel Santa Maria
We compared the lowest prices from 15 websites
Breakfast included
Praiadise Hostel

Acceptable for what it costs but prepare to be treated like a potential criminal. We arrived after midnight from a late flight and were told we had to pay in full before even being allowed to see the room. We didn't have that much cash on us (and for credit card they run the usual % scam). Despite them having our passports and credit card details from the booking and paying at check out being the standard in hotels, they continued to treat us like criminals who were going to run off in the morning. They refused to offer any solution so ended up roaming the abandoned streets of Praia trying to find a cash point. Never a pleasant start to a stay.

This review is the subjective opinion of a Tripadvisor member and not of TripAdvisor LLC.
Iolanda A
Lisbon, Portugal
241135
Reviewed 10 July 2018
Excellent for anyone staying in Praia

This three star hotel is very well located and provides anything one may need to make one's stay comfortable enough - from the kindness of its employees to the cozy hotel rooms (some better than others).

Ask Iolanda A about Hotel Santa Maria
Thank Iolanda A

This review is the subjective opinion of a Tripadvisor member and not of TripAdvisor LLC.
phutty
Tallinn, Estonia
1090356
Reviewed 24 May 2018
Well-placed on the Plateau and clearly trying their best to get things right

Topping and tailing our Cabo Verde holiday here, we chose the Santa Maria primarily for its value for money and location. By European/Western standards it would probably rank as a two-and-a-half star hotel rather than a three-star one, since there are quite a few niggling little things that count against it. I'll list them according to the room we were in.

1st night - ROOM 109
*Some lights not working
*Leaking shower cabin
*Lack of consistent hot water
*Dearth of power points for charging phones and tablets.
(We took this suite so as to have a bit more room, and there was quite a bit of that, but there was only one available power point in the main room that I could find that didn't involve unplugging something else, and one in the bathroom.)
*In every single remote control the batteries weren't working, or had to be 'warmed up' before they did, and almost all of the TV channels were blocked, meaning limited choice.

2nd & 3rd nights - ROOM 110
*Even fewer power points than in the other room - if you want to recharge anything you'll have to use the one available socket in the bathroom; alternatively, unplug the TV and/or set-top box, although since these are up on the wall you'll need either really long recharging cords or you'll have to balance things on top of the tele. There are no power points under/next to the bedside tables, and even where the writing desk is there's only one power point, so the lamp doesn't work if the fridge is plugged in or vice versa, and neither works if the air-conditioning's on.
*Bigger room but a real lack of lights, with none in the entryway - I had to use my mobile as a light to read the instructions for the safe (which didn't work anyway) and there were none in the 'sitting room', so with the lamp not plugged in it was a pretty useless dark corner.
*Lack of ventilation in the ensuite again, and no toilet roll holder (as in the other room).

For the same money, Room 110 is significantly larger (although the ensuite is still pokey - good luck not having to sit on the toilet diagonally!), with a little 'sitting room' corner with a couple of armchairs and a coffee table. Also on the plus side, the air-conditioning isn't right above the bed as in Room 109, so you can have it on all night without a chill wind on your back the whole time. The bed in Room 110 is also extra-large (a King, I guess?) and very comfortable, so a good night's sleep is no worry.

An unexpected plus on our return to the hotel, but not the first time (maybe it depends how many nights you stay collectively?), was that we were met at the airport upon our arrival back from the island of Maio by the "hotel's own driver", who whisked us to the hotel free of charge. (The taxi costs 1000$/€10 as a flat rate otherwise.) A very nice touch.

I'm not mentioning any of these things to run the place down: the reception staff, and the bar and restaurant team, are bubbly, helpful and very chilled (whether chatting away in English or, like the main barman, in Portuguese even when he's long since realised you don't understand it!). Those are definite plus-points, as were the big, comfortable beds and air-conditioning. The minibars (though empty when presumably meant to have something in them considering the spiel you're given) were useful when we bought our own water and provisions. The ensuites were a little pokey but otherwise fine, bar the aforementioned lack of ventilation.

The place generally has its share of character, with a musical theme (local artists and big names) running throughout, and you can see that despite the wear & tear and shortcomings here and there that the team are definitely putting their heart into it and want you to enjoy your stay at the hotel. Luggage can be stored, taxis can be ordered and more. They generally seem eager to help you out however they can.

Not a single card payment worked for us with European cards at the hotel, so we paid for our rooms in cash (card payments are subject to a 3% commission on top of whatever rate you're paying anyway, so we made a small saving). There is also a great shortage of change whether you're paying for your room or just a drink at the bar. We're not talking large amounts, obviously, but almost every time they had to scurry about looking for coins and low-denomination notes or else had to give it back/asked us to chase it up later.

The Cimboa bar on the front terrace offers dirt-cheap cocktails (400$/€3.70 for a large Cuba Libre!) overlooking the main pedestrian strip on the Plateau: great for people-watching, most reliable WiFi in the hotel bar the lobby itself and close to some decent souvenir/local ware stores. Cocktails are made by the enthusiastic staff, who'll do their best to get you to stay for a meal as well.

Room tip: If you choose a Suite, ask for 110 over 109 for the extra room. Better yet, ask for one on a higher floor so as to get a view!
Ask phutty about Hotel Santa Maria
Thank phutty

This review is the subjective opinion of a Tripadvisor member and not of TripAdvisor LLC.
willemh2018
61
Reviewed 21 March 2018 via mobile
Friendly

The staff is friendly we were only there to wait for our late flight. But we could wait in the lounge and use the baggage storage. Good wifi and food. The lounge has a tv. Pricing for the food is accaptable.

This review is the subjective opinion of a Tripadvisor member and not of TripAdvisor LLC.
toz_v
Rome, Italy
234
Reviewed 30 July 2017
Enough for exploring the city

The hotel is quite comfortable in general with satisfying facilities and wi-fi connection. Nothing to comment on that.

It is very central as well allowins the visitors to explore the very heart warming city of Praia.

A little plus would be the breakfast. It is enoguh but could be much better.