US$ 167
View Deal
Free cancellation until 11/03/21
Reserve now, pay at stay
eDreamsUS$ 142
TravelocityUS$ 167
Trip.comUS$ 205
View all 14 deals
Prices are provided by our partners, and reflect average nightly room rates, including taxes and fees that are fixed, known to our partners, and due at time of booking. Other miscellaneous taxes and hotel fees which are not fixed or due at time of booking may be payable at the property at time of stay. Please see our partners for more details.
James A
Riverside, California
4646

I read all the reviews. I still stayed there because the building was so cool. Air Conditioning didn't work in my suite and they gave me the run around. I got them to give us a new room and the woke up to water leaking all over the floor. I was more panicked than the help which were not very concerned. I won't be staying again. Breakfast was great and location good.

See all 232 reviews
Nearby Hotels 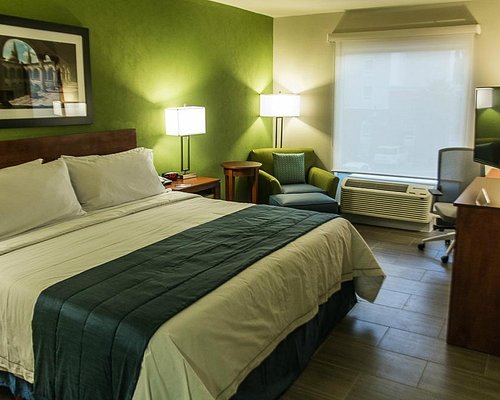 Krystal Urban Guadalajara
US$ 50
Booking.com
View Deal
Free cancellation
Reserve now, pay at stay
Hotels.com
US$ 51
Trip.com
US$ 38
ZenHotels.com
US$ 64
View all 14 deals from US$ 38
673 reviews
0.8 km from Hotel Demetria 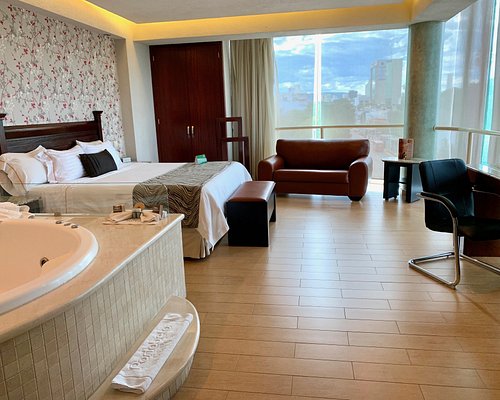 Snaptravel
View Deal
Booking.com
US$ 40
FindHotel
US$ 36
StayForLong
US$ 53
View all 13 deals from US$ 36
392 reviews
2.9 km from Hotel Demetria
We compared the lowest prices from 13 websites
Hyatt Regency Andares Guadalajara
US$ 165

Before traveling, I booked the "suite demetria" (the presidential suite), paid in full, nonrefundable, with breakfast included. Upon arriving, I showed the receptionist my confirmation email, which clearly said "suite demetria." I was told that they couldn't honor the reservation because the price I paid online wasn't enough. After two hours and speaking the manager, I was told definitively that they wouldn't honor my reservation and offered a room with no outdoor space and only one window looking directly at a wall. I was also told that they didn't offer breakfast, so they couldn't honor that part of my reservation. I was surprised to the see catalogue in the room said breakfast was included in the rate of their rooms, and the next morning, sure enough, breakfast was offered. The manager told me the catalogue was old and I would have to pay for breakfast. This included coffee, as they don't offer coffee makers or free coffee. The pool was open but had bugs and deck wasn't tended. The air conditioner in our room was also broken the first night and day, and the room had no fans, which made it difficult to sleep.

This review is the subjective opinion of a TripAdvisor member and not of TripAdvisor LLC
Maytev22
Guadalajara Metropolitan Area, Mexico
121
Reviewed 2 March 2020 via mobile
Very bad customer service at checkin

We arrived at hotel just with a debit card (husband forgot his wallet) and they requested a cash deposit (otherwise the refund on debit card will last a month) so we payed the room and mentioned we were going to the ATM to get the cash, the receptionist answer was “you can’t enter the room until you give me the cash deposit” (my husband was going right away to get the cash) it was extremely rude and we felt treated like delinquents. She noticed my strong disappointment, consulted with the manager and let us in, not before mentioning that we have one hour to bring her the cash... from that on the experience was not nice at all. The room was ok but with a lot of improvements to be made, the faucet was not working properly (my clothes got wet because it was licking) and towels were very low quality as well.

On the good side, bell boy was great, breakfast was really good as well.

I would not come back nor recommend this place.

This review is the subjective opinion of a TripAdvisor member and not of TripAdvisor LLC
GlobalNomad1362
Los Angeles, California
68
Reviewed 26 February 2020 via mobile
Very Good Hotel

I have stayed here very often since it opened. The location is perfect and it’s very comfortable with the occasional quirks. The bathtubs are either huge and round, using so much water I feel guilty and impossible to get out of, or are polished cement with very sharp angles! However, it has great style, the staff particularly the bellmen are very helpful and charming , I just wish they had an evening turn-down service, however if I hadn’t posted before it’s only because it was my best kept secret and I highly recommend it!

This review is the subjective opinion of a TripAdvisor member and not of TripAdvisor LLC
annab240
Los Angeles, California
96
Reviewed 18 January 2020 via mobile
Bad experience right away! Disappointed !!!!

So I have selected this hotel based on many reviews. We came to Guadalajara with my husband for a weekend. First, the promised driver pick up from the airport- he never came, it was confirmed several times with hotel via booking.com website messaging. I had to call hotel from airport twice to see here is the driver. They could not locate the driver not give me any answers. I took a taxi. When originally I booked the hotel I asked for early check in specifically because our flight arrived at 6.30 am and we needed a place to sleep after a red eye flight. It was all confirmed with hotel as well from the start. So we get to the hotel and there was no room for us as promised. Basically, so far we have to wait for the room to check in and all my daily schedule is ruined because we cannot rest after our flight. So far it’s has been the worst Mexican hotel experience. I do travel often to Mexico and this is very disappointing.

This review is the subjective opinion of a TripAdvisor member and not of TripAdvisor LLC
Pulpozurchet
Tiburon, California
112
Reviewed 9 September 2019 via mobile
Beautiful hotel

Is one of the most unique and friendly hotels I ever been in ! The art is amazing and the stuff very friendly ,the breakfast is amazing . If you in gdl you should look into hotel Demetria Guadalajara mx