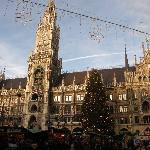 I've been traveling to Europe since taking a 9 week seminar in European history in college. That inspired me to start an exchange program at the high school I was teaching at. I've conducted tours of various sites in and around Munich and also advised business travelers about what to take in during off hours.

According to polls, Munich is the German city that most Germans would like to live in, if they could. It actually is composed of several smaller towns, and since no buildings taller than the tallest church steeple are allowed according to building code, the center feels like a town. This guide will take you on a walking tour of the city center, which is pedestrian zone free of all traffic except early morning delivery trucks and emergency vehicles.

top
Problem with this guide?
×
Was this guide helpful?
YesNo