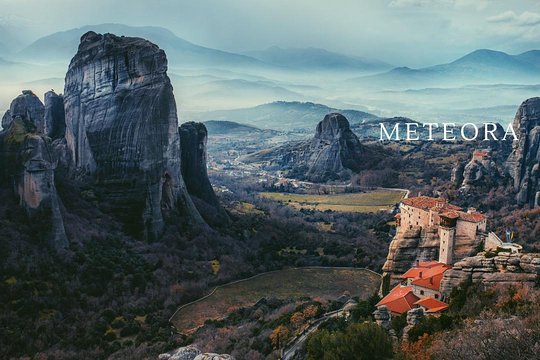 This product is unavailable to book via TripAdvisor. Contact the supplier for availability.
From
US$ 695.71
Free Cancellation up to 24 hours in advance
Low Price Guarantee
No Booking Fees
Overview
Unique Transfers and Tours offers you luxury vehicles, limo minivans, minibus.
Upgrade your transfers by choosing vip transportation services around the city & private tours.
What to Expect
Itinerary
This is a typical itinerary for this product

The Meteora is a rock formation in central Greece hosting one of the largest and most precipitously built complexes of Eastern Orthodox monasteries, second in importance only to Mount Athos. The six (of an original twenty four) monasteries are built on immense natural pillars and hill-like rounded boulders that dominate the local area. It is located near the town of Kalambaka at the northwestern edge of the Plain of Thessaly near the Pineios river and Pindus Mountains.
Show More
Important Information
Departure Point
Traveler pickup is offered
Please contact with us for our meeting point.
Duration
1h
Inclusions
Show More
Additional Info
Cancellation Policy
For a full refund, cancel at least 24 hours in advance of the start date of the experience.

Trek51071615770
11
Top Transfer Services
I was very pleased with their transportation services. The pickup was just in time and the driver was really…
Read more
Key Details
Why Book on TripAdvisor?