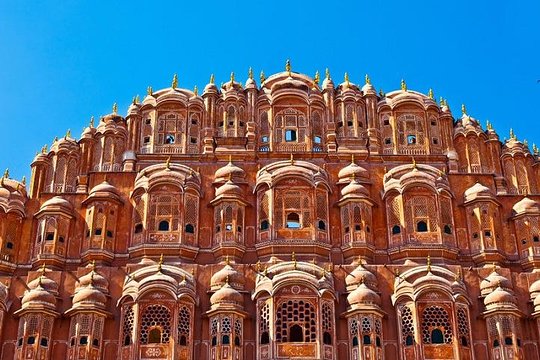 Stop At: Qutub Minar, Qutb Minar, Mehrauli, New Delhi 110030 India
Day 1: Mumbai to Delhi by FLY + City Tour and Drive to Agra (L, D) Pickup at 5am or According to your flight time from your hotel in Mumbai and transfer to the Airport for Flight to Delhi. Arrival at 9:30am approx Delhi Airport, then proceed on the half-day city tour of Delhi. In New Delhi you'll visit the 11th century Qutab Minar Tower,built by Qutub-ud-din Aibek of the Slave Dynasty, who took possession of Delhi in 1206. You'll also see the India Gate, a memorial raised in honor of the Indian soldiers martyred during the Afghan War, and drive past government buildings including the President’s House and Parliament House (Dating back to the time of British Raj)

Get picked up from your hotel at 6am for a sunrise visit to the world famous "monument of love," The Taj Mahal, a UNESCO World Heritage Site (closed Fridays). After breakfast, visit Agra Fort and then drive back to the old walled city of Jaipur. Founded by Maharaja Jai Singh II, this ‘pink city’ is meticulously constructed on the lines of the Shilpa-Shastra, an ancient Hindu treatise on architecture. The city's ancient palaces and forts have borne witness to countless royal processions and fabulous splendor. You'll also make a stop to visit Fatehpur Sikri which has been described as the world’s most perfectly preserved ghost town. Built by Akbar in the late 16th century, it was abandoned after only 14 years, and the elegant buildings of this superb walled city remain intact to this day.

After breakfast, check out at 8am and proceed to visit the Amber Fort, which used to be the capital of the Kachhwaha clan until Jaipur was made the official capital in 1727. You'll also visit the Hawa Mahal, built in 1799 by Maharaja Sawai Pratap Singh, considered the most stunning sight in the city of Jaipur.After lunch, proceed to the City Palace, the principal residence of the ruling family, known for its stunning architecture. Part of the palace is now converted into a magnificent museum. You'll also see Jantar Mantar, a stone observatory built in the 18th century.Time permitting you will also get a look at Jaipur's cottage industry specializing in hand-woven carpets & textiles. Witness how silk carpets are made by hand. In the evening, transfer to Delhi where you'll be dropped off for next destination (At your won Flight)
Duration: 4 hours

Camera2020
42
Agra tour
An excellent trip with lots of useful and educational information with a focus on the Taj Mahal. Very nice…
Read more

U9781HCjenniferg
10
Good tailored shopping tour
This was a full day tour with a friendly and prompt hotel pick up. Driver was polite and drove well. Took me to…
Read more

Prashant A
Goa, India
23
Awesome
Yogesh sharma is amazing guide, It was so much fun touring Taj Mahal and Fort Agra with Him. Very interactive,…
Read more

Jay N
Bangkok, Thailand
41
Agra 1 day trip
We had a wonderful time with Pioneer tour.special mention has to be done for Mr.Rajesh.He picked us up on…
Read more

chefcorey8503
22
Great Tour
I had an amazing tour with Rajkumar for the full day tour around Agra. He is very knowledgeable about the area and…
Read more

707leeu
York
41
Agra
Very informative and relaxed visit to Agra to see the Taj and Fort. Raj was helpful and friendly, answered all our…
Read more

Hazelwood09
Bournemouth, United Kingdom
144
Shopping in New Delhi in December
We had a good, friendly guide and taxi driver, that picked us up from our hotel and took us to various shopping…
Read more

584katrinp
53
Very comfortable ride!
I felt very comfortable driving with t and would book them everytime again. Thanks for driving me safely through…
Read more

bernards6
20
Agra Day Trip
Neeraj was fantastic! He was very extremely knowledgable and enthusiastic about Taj Mahal, Agra Fort and the…
Read more

932julianaa
11
Agra, taj mahal day tour
Me and my friend very satisfied with the service. The tour guide can speak English very fluent easy for us to…
Read more