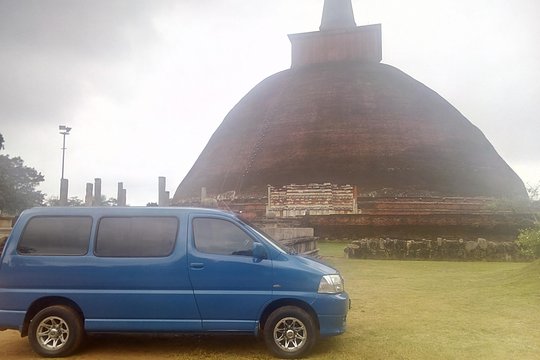 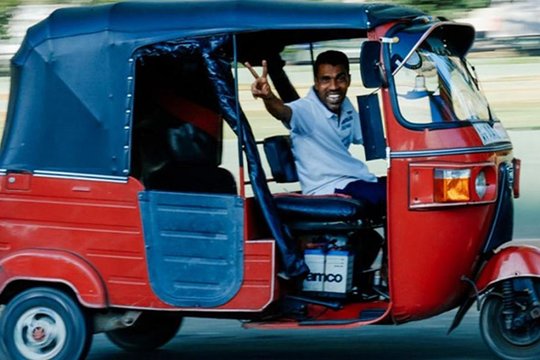 Select Date and Travellers
From
US$ 24.00
(Price varies by group size)
Date
2 travellers
Options
Free Cancellation up to 24 hours in advance
Low Price GuaranteeNo Booking Fees
Overview
What to Expect
Our took tuk driver will come to the hotel or the locations whre in anuradhapura and drive to jethawanarama museum to buy tickets(on your cost) and visit museum and the biger sthupa jethavanarama
• The Jetavanaramaya (world's tallest stupa) is a stupa located in the ruins of Jetavana in the sacred world heritage city of Anuradhapura, Sri Lanka. At 122 metres (400 ft) It is the world's tallest stupa.Mahasena of Anuradhapura (273–301) initiated the construction of the stupa following the destruction of the mahavihara. His son Maghavanna I completed the construction of the stupa.A part of a sash or belt tied by the Buddha is believed to be the relic that is enshrined here.

Ruwanwelisaya is a stupa, a hemispherical structure containing relics, in Sri Lanka, considered sacred to many Buddhists all over the world.[1] It was built by King Dutugemunu[

citation needed] c. 140 B.C., who became lord of all Sri Lanka after a war in which the Chola King Ellalan, was defeated. It is also known as "Mahathupa", "Swarnamali Chaitya", "Suvarnamali Mahaceti" (in Pali) and "Rathnamali Dagaba".

Jaya Sri Maha Bodhi (Sinhala: ජය ශ්‍රී මහා බොධිය) is a sacred fig tree in the Mahamewna Gardens, Anuradhapura, Sri Lanka. It is said to be the right-wing branch (southern branch) from the historical Sri Maha Bodhi at Buddha Gaya in India under which Lord Buddha attained Enlightenment. It was planted in 288 BC,[1][2][3] and is the oldest living human-planted tree in the world with a known planting date. Today it is one of the most sacred relics of the Buddhists in Sri Lanka and respected by Buddhists all over the world.

Abhayagiri Vihāra was a major monastery site of Mahayana, Theravadaand Vajrayana Buddhism that was situated in Anuradhapura, Sri Lanka. It is one of the most extensive ruins in the world and one of the most sacred Buddhist pilgrimage cities in the nation. Historically it was a great monastic centre as well as a royal capital, with magnificent monasteriesrising to many stories, roofed with gilt bronze or tiles of burnt clay glazed in brilliant colors. To the north of the city, encircled by great walls and containing elaborate bathing ponds, carved balustrades and moonstones, stood "Abhayagiri", one of seventeen such religious units in Anuradhapura and the largest of its five major viharas. One of the focal points of the complex is an ancient stupa, the Abhayagiri Dagaba. Surrounding the humped dagaba, Abhayagiri Vihara was a seat of the Northern Monastery, or Uttara Vihara and the original custodian of the Tooth relic in the island.
Show More
Important Information
Departure Point
Anuradhapura cit aria
Duration
4h
Return Details
Same hotel where pick you up
Inclusions
Exclusions
Show More
Additional Info
Cancellation Policy
For a full refund, cancel at least 24 hours in advance of the start date of the experience.
0Reviews3Q&A

By: Ceylenese
110 reviews
Certificate of Excellence

kasi56
10
Amazing tour of Srilanka
We four of us went on a seven days tour of Sri Lanka covering Anuradhapura, Sigiriya,Kandy,newaraliya,Galle and…
Read more

Melissaandrea3
10
Amazing two-day tour
My family and I had an amazing 2-day tour of South Sri Lanka organized by Dimuth. He is a great driver and knows…
Read more

hetav123
10
Very Nice 👌
The trip was wonderful and really enjoyed your paradise country. Driver was very cooperative and helpful. We did…
Read more

bhagyau2020
New Delhi, India
10
Excellent Kany day tour with Dimuth.
We are a fmily with 4 adults, booked day trips in Colombo with this tour operator as my friend recommended. It was…
Read more

Yurybrew
10
Best of the best!
Everything was great. Got contacted prior the visit via whatapp, got picked up from the airport. Got to see…
Read more

rowerf
Singapore, Singapore
20
Awesome day out with Safari and Galle fort
We were promptly picked up at 2am from our hotel in Colombo. Entered to the Park around 07:00am . We spotted three…
Read more 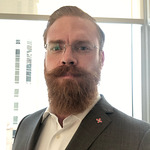 512willemh
Dubai, United Arab Emirates
51
Definitely worth it
Had a solo trip so I had to pay a bit more (as expected) but it was still worth it. The guide was friendly and…
Read more

Travelturf
Colombo, Sri Lanka
320
Honeymoon tour
Excellent service with kind person and appreciated he's service and we can recommend to other tourists as well.
Read more

jhonev2019
Milan, Italy
10
Must do it
Dimuth is an amazing guy. Friendly, loyal, a man of integrity and good character, an Expert for Kandy day tour. …
Read more

Chem758
San Jose del Cabo, Mexico
11
City tour in Colombo
We booked Ceylenese tour on our cruse tour in Colombo. He was a excellent guide and he knows how to treat old…
Read more

Pushpada
Sydney, Australia
21
Day trip to Kandy with Dimuth
Fially we had a Fantastic day tour with them. Our friendly guide/driver took us many of places on the way to…
Read more