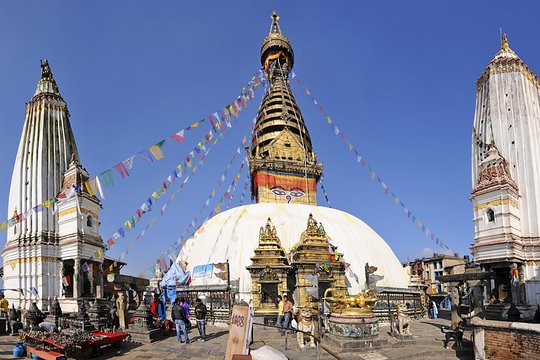 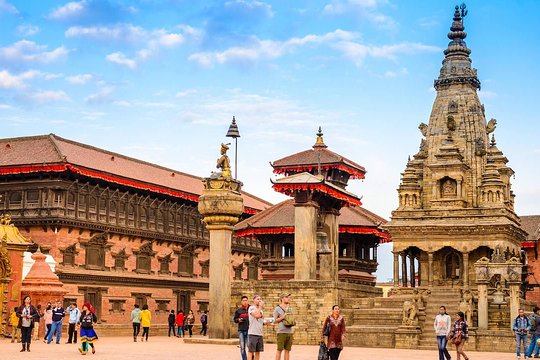 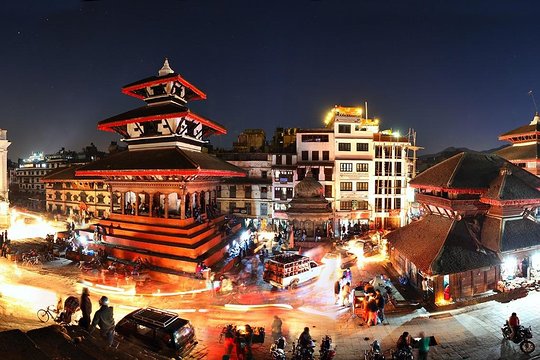 Stop At: Basantapur, Nepal
Built by Malla kings during the 15th and 16th centuries, the gems of the palace square include Kumari Bahal or the House of the Living Goddess, Hanuman Dhoka Palace Museum, Taleju Temple, Mul Chowk, Nasal Chowk, Nau Taale Durbar, the shrine of Kaal Bhairav, etc. The House of Kumari or the Living Goddess, built by King Jaya Prakash Malla in 1757 AD, lies in the southern part of the durbar square. Worshipped as the manifestation of Goddess Durga, the Kumari is a pre-pubescent girl from the Newari community. Nepalese seeks her blessings believing that the goddess resides in her body. Inside the Hanuman Dhoka Palace are courtyards and living quarters of the Malla and Shah kings. One can view artifacts and photographs of the Shah royals and Rana aristocrats at the Hanuman Dhoka Palace Museum. The pagoda-roofed Taleju Temple, dedicated to Goddess Taleju (patron goddess of Nepalese royals) lies near the old palace.
Duration: 2 hours

Stop At: Swayambhunath, Kathmandu 44600, Nepal
A journey up to the Buddhist temple and Unesco World Heritage Site of Swayambhunath is one of the definitive experiences of Kathmandu. Mobbed by monkeys and soaring above the city on a lofty hilltop, the ‘Monkey Temple’ is a fascinating jumble of Buddhist and Hindu iconography. Even the 2015 earthquake failed to topple Kathmandu's best loved temple, though a couple of outlying buildings crumbled in the tremor.
According to a popular legend Kathmandu was once a huge lake. Boddhisattva Manjushri built Swayambhu after draining this lake. Several Buddhist and Hindu shrines surround the large white dome of the stupa. Dotting the temple complex are shrines of Harati Mai (the goddess of children and smallpox), Saraswati (the goddess of learning) and Shantipur (the resting place of a Tantric guru). A Buddhist Monastery and a museum also lie in the temple precint.
The compound is centred on the gleaming white stupa, topped by a gilded spire painted with the eyes of the Buddha. Depictions of these eyes appear all over the Kathmandu Valley. The atmosphere is heightened in the morning and evening by local devotees who make a ritual circumnavigation of the stupa, spinning the prayer wheels set into its base. It is also a great place to watch the sun set over Kathmandu.
Duration: 2 hours

Stop At: Pashupatinath Temple, Pashupati Nath Road, Kathmandu 44600 Nepal
Pashupatinath tour takes you to one of the holiest sites for devotees of Lord Shiva. Lying beside the sacred Bagmati River, the gilded pagoda-roofed temple dates back to 400AD. The Pashupatinath temple was renovated in the seventeenth century after the original structure was destroyed by termites. A large bronze statue of Nandi the ‘Bull’, the sacred vahana(vehicle) of Lord Shiva guards the entrance. According to legend as Lord Shiva is the protector of cattle, especially cows, his vehicle is ‘Nandi’, the Bull. Nandi is also worshipped and he grants boons and fulfill wishes of his devotees. Several smaller temples and ashrams surround the main temple. The Hindu cremation site of Arya Ghat lies below the temple. Hindus believe that cremating the dead at Arya Ghat helps the dead attain salvation.

Offer prayers at the main shrine if you are a Hindu. Non-Hindus can view the pagoda-roofed temple and the cremation site of Arya Ghat from the eastern bank of Bagmati River. Ponder about the impermanence of life while observing the cremation rites. The temple is also home to several ash-smeared sadhus in colourful garb. Seek their blessings and take pictures with them. During the devastating 2015 earthquake, Pashupatinath Temple was the only world heritage site in Kathmandu which did not suffer any damage. While many of the ancient heritage sites suffered significant damages, this Hindu temple stood firm and tall. Hindus believe it was because of divine intervention. The importance of this holy site has increased since then.
Duration: 2 hours

Stop At: Boudhanath Stupa, Boudh, Kathmandu 44600 Nepal
Take an early morning or evening stroll around the inspiring white dome buzzing with energy; observe the devout people circumambulating, light a butter lamp and say a little prayer, look around for souvenirs, or enjoy the view from a rooftop restaurant with a hot cup of cofee. Boudha is always full of life.

Situated 8 km to the east of downtown Kathmandu, Boudha, is one of the UNESCO World Heritage sites and one of the most imposing landmarks in Kathmandu. Visible as soon as you land at the Tribhuvan International Airport, it is the largest stupa in the Kathmandu Valley.

The 36-meter-high stupa of Boudha is massive and dominates the skyline in the area. With countless monasteries around it, Boudha is the center of Tibetan Buddhism in Nepal.

Built in the shape of a mandala designed to replicate the Gyangtse of Tibet, the stupa was renovated by Licchhavi rulers in the 8th century. The location of the stupa is interesting as it once lay on the ancient trade route to Tibet and it was here that Tibetan merchants rested and offered prayers for many centuries. It is one of the major pilgrimage sites for Buddhists from around the world.

On each side are the all-seeing-eyes of the Buddha symbolizing awareness. The canopy has 13 stages. At ground level there is a brick wall that has 147 niches and 108 images of the meditational Buddha inset behind copper prayer wheels.
Duration: 45 minutes

Stop At: Patan Durbar Square, Patan (Lalitpur) 44700 Nepal
Our guide will be there at your hotel in the morning. Take a drive to the ancient city of Patan. Also known as ‘City of Artisans’, temples and stupas in various shapes, sizes and antiquity fill this old city. The city is populated by Newars considered as the original inhabitants of the Kathmandu valley. After sometime you reach Patan Durbar Square is where the main highlights of this tour starts. The grey stone temple of Krishna Mandir dominates the entrance of the square. Dedicated to Lord Krishna, this is one of the most significant Hindu temples. The Patan Palace Museum is the former palace of the Malla kings and now houses a museum. Admire the gold, silver and bronze artwork at the Golden Temple or Hiranya Varna Mahavihar.
Duration: 2 hours

Stop At: Bhaktapur Durbar Square, Bhaktapur 00977-1-4701148 Nepal
Bhaktapur, known as the ‘City of Devotees’ has a rustic charm. This city takes you back in time. The royal square is divided into three squares- the Bhaktapur Durbar Square, Taumadhi Square and Dattatreya Square. The brick-laden walkways lead you to temples with intricately carved out woodwork. As you reach the square witness the only five-tiered pagoda-roofed temple in Nepal, Nyatapol. It was built in the 17th century. Walk ahead and peek from the latticed wooden windows of the Palace of 55 Windows. Gaze in wonder at the wonderful metal repousse work of Golden Gate. Further ahead you access the inner areas of the palace. The abundant pagoda styled temples and monuments that dot the square, gives a perfect example of the expressive and complex design of Nepalese architecture back in the middle ages. Stroll around pottery square and observe the potters busy at work - spinning their wheels, firing their kiln and moulding clay into beautiful artifacts.
Duration: 3 hours

Gabrielle22817
Munich, Germany
42
Annapurna Circuit and Thorang La Pass ...another amazing adventure!!!
I am very happy to write again about a beautiful experience inside Himalaya. Annapurna Circuit was another…
Read more

David
11
David
Great trip. The tour was well organised, great food, and the my guide, Dipak was brilliant. Would massively…
Read more

amruta k
10
Trek to Langtang
The November weather was very favourable. Icicles had made comfortable arrangements throughout the trek, and…
Read more

Petra R
11
Manaslu Trek
Top organized trek of icicles adventur. Also arrival and accommodation before and after the trek were well…
Read more

BonoAntipolo
Antipolo City, Philippines
138
Lumbini and Chandaghiri Hill
Indira and Parashu went to great lengths to make sure our adventures around Nepal were well organized and…
Read more

Woodyz T
10
Gokyo lake
Everything is perfect. We love this trip. Your guide and porter take care us the best. We are very happy
Read more