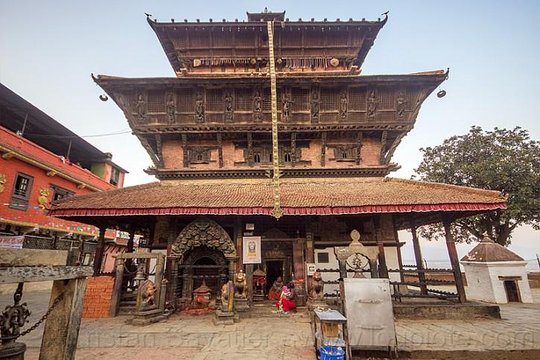 Likely To Sell Out
Select Date and Travellers
From
US$ 256.42
Date
2 travellers
Low Price GuaranteeNo Booking Fees
Overview
What to Expect
Itinerary

Kirtipur (“City of Glory”) is located on top of the hill about 5km south of Kathmandu city. This historical and traditional city offers the stunning view of Kathmandu valley and as well as the majestic Himalayas. Kirtipur is one of the medieval kingdoms of the Kathmandu Valley. Kirtipur, with Nepal’s largest and oldest Tribhuvan University, is also an important learning center of Nepal.A Theravada Buddhist monastery built in traditional Thai architectural style is situated near the entrance to the city where one can observe shrines and other temples, old houses, people in traditional dress working on ancient looms which are the major attraction of Kirtipur Day Tour. After exploring the wonderful place we will back to Kathmandu.

This historic town has many interesting sights to see such as Bagh Bhairab temple, is one of the most popular temples dedicated to the deity Bhairab (a manifestation of Shiva) in the form of a tiger, Uma Maheshwar temple (locally, Kwacho Dega) is one of the important heritage sites of Kirtipur. This pagoda-style, three-storied temple is situated at the highest point (1414 m) of Kirtipur.
Show More
Important Information
Departure Point
Bhagawan Bahal Marg 29, Kathmandu 44600, Nepal

Kasyamura
Osaka, Japan
20
I couldn't forget!!
We trekked to poon hill back in December and the service that trek nepal topped my expectation. It was clear sky…
Read more

Mikkel S
20
Amazing company and guides
We returned from our 4 days Trek on 28 Jan 2020 and we wanted to let you know how wonderful it was. I had such a…
Read more

krishna p
20
Excellent service
It is one of the best tour in my life.It was amazing sun rise view from poon hill. Trek Nepal Himalayas provides…
Read more

martin h
20
On of the best service
Recently we visit Nepal.we have five days planning to visit Nepal but we dont have idea we went for solution trek…
Read more

Silke D
10
Annapurna Circuit
I did the Annapurna circuit and had a wonderful time.The circuit is a bit touristic, but still the nature is…
Read more

Nirmala T
40
I ever had.
I have gone to Annapurna Base Camp trek by Trek Nepal Himalayas. There, I got family environment during whole trek…
Read more