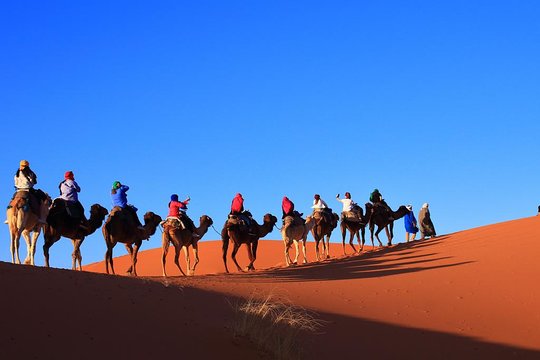 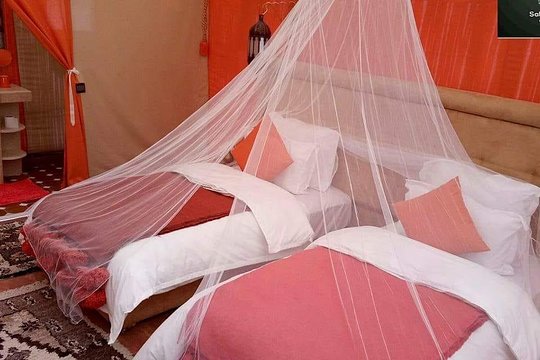 Select Date and Travellers
From
US$ 99.87
Date
2 travellers
Options
Free Cancellation up to 24 hours in advance
Low Price GuaranteeNo Booking Fees
Overview
Highlights
What to Expect
Itinerary
This is a typical itinerary for this product

Pick up early in the morning 07h30. we will drive  towards the Kasbah Ait Ben Hadou passing by Tizi N Tichka and Hight Atlas mountains , exploring the Berber farms and traditional villages, Many stops will be made during the way. You will visit the Kasbah Ait Ben Haddou. It’s a UNESCO World Heritage dating from the 11th century. It is a striking example of the architecture of the traditional Moroccan South. After lunch, you’ll continue through the Roses valley to reach your accommodation at Boumalene Dades village .

just beyond Boumalene is Ait Arbi, where there are a series of striking ksar above the road. The road continues past areas of unusual rock formations, through Tamnalt and Ait Oudinar, where there is basic accommodation, the valley narrows after Ait Oudinar, creating the most striking area of the gorges, where the cliffs are vivid shades of red,

Day 2: The morning of the second day we continue to the Todgha Groges:

particular spectacular, is narrower and more winding than the Dades Gorge, the 14 km route up the Gorge is very narrow, there are many good views and some stopping places on the road. About 6 km further on is the most visited section of the gorge, where the high cliffs leave just enough space for the road and river.

After Lunch (at your leasure), we continue the trip to the Merzouga Dunes:The 150 m high dunes of Erg Chebbi, a vast pile sand streching into the Sahara. As the sun shifts across the sky during the day the dunes change colour, from the palest cream to deep oranges and reds, and their beautiful shapes and patterns are constantly sculpted by the wind, after 45 minutes of camel ride, spend the night in a camp in the desert in a tent and live an evening of folksong music of the region with fire in the middle of the camp.

the third day we return to the city of Marrakech

Day 3: Back to Marrakech

Write a review
Traveller rating
Traveller type
Time of year
Language
Selected filters
No results found. Try removing a filter, changing your search, or to read reviews.
About the operator

flopompom
10
Good value for money
Easy pickup from Riad. Stop off at least once for the loo/drink. When you arrive at the drop off a guide greets…
Read more

271MichaelK
Marrakech, Morocco
61
Exceptional
This was an awesome tour, and I don't say that lightly. Cheap as chips, fantastic value. Plus our tour guide Omar…
Read more

Inspiration777481
10
Waterfalls and monkey with Omar!!!
Nice to get out of the city, we walked down to the waterfalls and went to see the monkeys... had a nice lunch (but…
Read more

Getaway68095
10
Amazing experience and fantastictour guides
This is a fantastic day trip, the mini bus is comfortable and the tour guide Omar is amazing. Patient, friendly &…
Read more

simonharry20
London, United Kingdom
10
Very special experience
We were impressed by the landscapes and the beautiful desert, the food was good It was exciting experience, the…
Read more

Z9465QCpeterh
10
Just wonderful !!
Good travel, adorable staff, we enjoyed a lot, Merzouga such an amazing desert, we are coming back guys, thank you…
Read more

Nathadelac
20
Had a great time !!
Went with my friend on this adventure, Omar is the guide and we had a great time. The guide takes a charge of 30…
Read more

Manifestmami
20
AMAZING
the long drive was well worth the amazing views and the drive up was beautiful anyway. The tour guide wasn’t pushy…
Read more

HOTNESS01
10
Miss
What a wow, this place is just amazing. Heaven on earth. We had the best tour guide Omar, he took us through the…
Read more

Shany_rs
10
Very Good Tour
Me and my mates 4 of us visited this beautiful place, and were greeted by a number of tour guides however they…
Read more

samayaa2019
30
Tour of Marakech
Was taken by Rashed, who was a good tour guide, friendly and knowledgeable. Really enjoyed learning abou the…
Read more