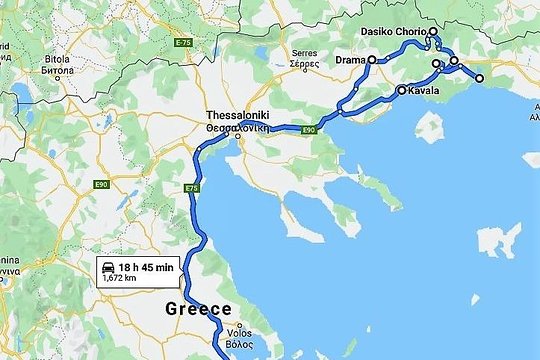 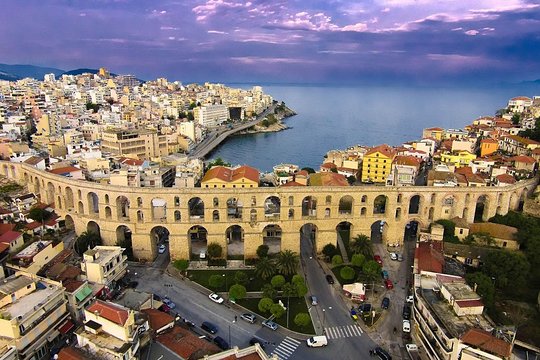 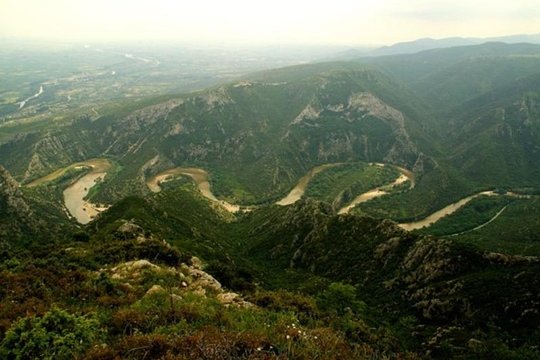 Stop At: Palaios Panteleimonas, Palaios Panteleimonas, Pieria Region, Central Macedonia
You will visit this town for its impressive local architectural style; the place has a history that dates back to the 14th c. You will find folk art shops, traditional guest houses, picturesque cafes and tavernas. Park the motorcycle and enter the town on foot, walk the narrow alleys down to the central square where the church of Agios Panteleimonas stands, surrounded by century-old plane trees. This is the perfect spot for you to enjoy the breathtaking view of the snow capped peaks of Mt. Olympus.
Duration: 1 hour

Stop At: Litochoro 602 00, Greece
Litochoro is an ideal travel destination year-round. Although it is built on one of the highest peaks of Mt. Olympus (Mytikas elev. 2,918 m.) it is just a few kilometres away from the shores of Pieria. This significant picturesque town is an awesome starting point for hiking excursions on the “Mountain of the gods”.
Explore the old traditional village with its narrow streets and houses built according to the macedonian architecture. Pass by the lush green Katounia Park where you should make a stop by the Maritime Museum.
Duration: 1 hour

Stop At: Elatias Forest, Drama Greece
A magnificent forrest invites you to explore it. The route is majestic and the scenery breathtaking. You will ride in th emidst of the forrest and enjoy every second of it.
Duration: 3 hours

Stop At: Chateau Nico Lazaridi Winery, Local Community of Agora Municipality of Doxato, Drama 661 00 Greece
The region of Drama is one of the finest Greek regions for wine production. Nico Lazaridi estate is one of the finest examples where you can see the vinification process, taste the eclectic wines and also visit the art gallery situtated inside the winery. All the labels of their wines are actual paintings that can be viewed in their gallery
Duration: 2 hours

Stop At: Old Town of Xanthi, Xanthi 67100 Greece
Kosynthos River divides the city into the west part, where the old and the modern town are located, and the east part, the “Samakov district”, that boasts a rich natural environment. Both parts still preserve their traditional flair, mesmerizing visitors with their nobility and magnificence. The cobbled narrow streets of the Old Town are decorated by gorgeous mansions, whose architectural style is a marvelous blend of local and ottoman architecture as well as Greek Neoclassicism architectural style. Together with the Byzantine churches and the picturesque squares, the city’s Old Town could be said to be an open museum, the glory of which remains untouched through the years. The modern part of the city boasts a beautiful square with a Clock and the renovated tobacco warehouses including the famous “Π», on Kapnergaton str., which took its name from the shape of the 1890’s edifices. Don’t forget to visit the flea market with its distinctive local flavor taking places every Saturday at Zoagoras Square!
Duration: 2 hours

Stop At: Nestos River, Stavroupoli 67062 Greece
Being the natural border between the districts of Kavala and Xanthi, the Nestos runs a long way of sheer gorgeousness consisting in rich forests, rare wetlands and imposing geological formations. A breath of life and home to a very delicate habitat, it is one of the top 5 biotopes in Europe. The straits of the Nestos are definitely the best part of this wonderful place, a botanical garden of 23.800.000 sq., deservedly designated as an “aesthetic forest”. You will have the chance to experience kayaking in this magnificent river. Do not miss it!
Duration: 5 hours

Stop At: Kavala, Kavala, Kavala Region, East Macedonia and Thrace
Kavala, the capital and main port of the Kavala prefecture is amphitheatrically built on the slopes of Mt. Symvolo forming one of the most picturesque cities in Greece. The city’s breeze sweeps through its historic buildings, which perfectly reflect the city’s modern character.
Duration: 3 hours

Stop At: Imaret, 30-32 Th. Poulidou, Kavala 652 01 Greece
Imaret is an impressive building erected by Mehmet Ali (1769-1849) as a donation to its native town. Ali was born in Kavala and later became Ruler of Egypt. It is situated on the western side of the Old City, in Panayia, occupying an area of 3500 m2. It was beautifully renovated by the Misirians, a family of tobacco traders. The building complex was a “kulliye”- a religious school- maybe the last of the Ottoman Empire offering social and educational services. On its premises it hosted two Madrasahs (religious educational foundations), two mestzit (pray-spaces), an imaret (a kitchen for soup), a mekteb (elementary school), offices and dormitories.

The initial educational and charity purpose of the foundation eventually changed and after 1858 it was even considered to be harmful for the city. It continued however to operate as a religious school until 1902 and as a charity foundation until 1923. After the exchange of populations between Greece and Turkey at the beginning of the ‘70s, Imaret was inhabited by refugees. After 1967 Imaret entered into an era of decadence. Its renovation lasted 22 months and today it operates as a luxury hotel.
Duration: 2 hours

Stop At: Thessaloniki, Thessaloniki, Thessaloniki Region, Central Macedonia
The second biggest city of Greece is one of the most charming cities in Greece. Its waterfront, the museums, the monuments, the excellent food all make this city the perfect place to relax and enjoy. Walk it spromenade and allow yourself to unwind fully in Thermaikos Gulf
Duration: 6 hours

Stop At: Platamonas Castle, Platamon 60065 Greece
The castle is at the location of the ancient city of Heraclia at the exit of the Tempi valey and it controls the route from Macedonia to Thessaly and to Southern Greece. The name “Platamon” appears for the first time in an imperial order of 1198 but, most probably, there was already a Byzantine castle there, since the 10th century.

After the fall of Constantinople during the 4th Crusade in 1204, Platamon came under the jurisdiction of Boniface of Montferrat, king of Thessaloniki who gave it to the Lombard knight Rolando Piska. He is the one who rebuilt the castle on top of the old ruined construction.
Duration: 2 hours

rainersch2019
10
We will make it again !
We rented two 1250 BMW GS. The communication in advance, the ready to go prepared bikes, everyting was perfect.…
Read more 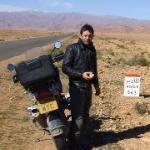 theodzotos
10
Excellent
Everything was great. At the GStraveller shop, an employee of the company welcomed me. The paperwork was done in…
Read more

titosmavrakis
10
BMW 1250 Gs Rent
Perfect experience, real professionals!!! I got a brand new BMW 1250 Gs I will do it again for sure...
Read more

ehanson79
Visalia, California
10
Great Trip
I got lucky finding these guys. Needed a bike last minute because I changed my plans from Italy to Greece due to…
Read more

curtis42
Reno, Nevada
20
GS Traveler - Best source for motorcycle rental in Greece.
The quality of the bike (F850GS) was perfect. The service, prompt responsive to my numerous questions was the best…
Read more

Magdiel11
10
Great motorcycle rental
Great service, the motorcycle was in a great condition, it was a pleasure. Will I happy to visit again.
Read more 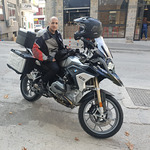 Moshe A
10
Tour to north of greece
We have rented BMW 1200 GS from GS-traveler for 5 days in Oct-19, All staff (Stavros, Dimitris and others) were…
Read more 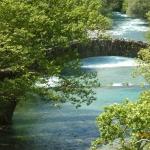 muli r
Hod Hasharon, Israel
138
A great rental agency
We enjoyed very much our experience with Dimitris and Stavros. We reserved the bike at short notice and received a…
Read more