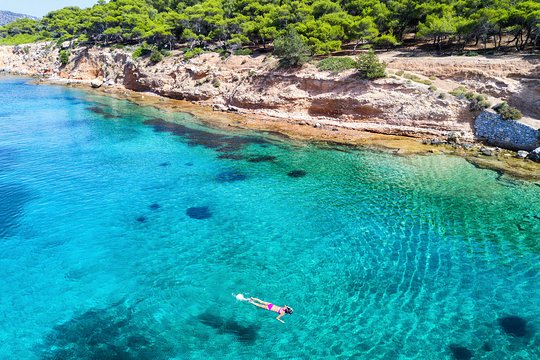 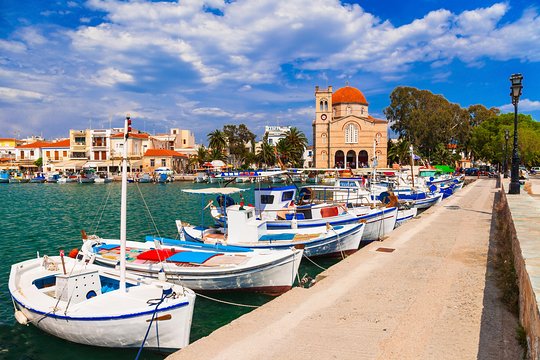 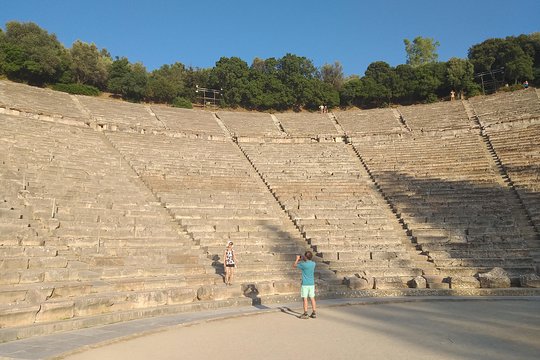 Day 1: The isle of Aegina

Stop At: Aegina, Aegina, Saronic Gulf Islands, Attica
Hotel pick up to Piraeus. We take the boat to the island of Aegina, the princess of the Saronic gulf–Coffee in one of the many Café of the port. Walk around the streets near the port –We visit the miraculus Agios Nektarios Monastery, the Church and the Palaia Chora hill–Then we move towards the famous Temple of Aphaia Athena laid in a beautiful pinε forest with a marvelous view to the Aegean Sea. We make a semicircular round of the island getting to Perdika- a nice coastal fish village. From this fishing port we take the boat to Moni, the superb small island. We swim in the clear crystal waters enjoying Ouzo + Meze in the company of the animals of the uninhabited island such as the Chamois Cretan goat- deer and peacocks – Return to Aegina city -Dinner-Greek music-Overnight

Pass By: Angistri, Angistri, Saronic Gulf Islands, Attica
Leaving Aegina for the isle of Angistri with a hired small cruise boat. Swimming, fishing and snorkeling in the small bays of the central Saronic gulf picturesque uninhabited islands. Barbeque by the sea or lunch in a fish- tavern. In the afternoon we depart for the magnificent village of Palaia Epidavros built between a lemon and orange tree grove. Dinner in a coastal tavern of the village – Overnight.

Pass By: Mycenae, Mycenae, Argolis Region, Peloponnese
We take the road to Ancient Epidavros. Visit the archaeological site and the huge theatre (a UNESCO World Cultural Heritage Monument) -famous for its symmetry and beauty and admired for its exceptional acoustics , used again today for dramatic performances. Then after an easy drive of twenty minutes we get to Nafplio the romantic beautiful city in the argolic gulf. We stroll around the picturesque narrow streets with the many restaurants where we‘ll take our lunch.

Then we visit the archaeological site of Mycenae (another UNESCO World Cultural Heritage Monument),.the famous center of the Mycenaean Civilization. The period of Greek history between 1600 BC until around 1100 BC is called “Mycenaean”. Referring to Mycenae Homer first reports the city, describing it as “golden”. We admire among others the Gate of the Lions, the Royal Palace, the treasure of Atreus and the tomb of Klytemnestra.

We take the road to Corinthos Canal. Half an hour Stop for a drink and pictures. Continue to Athens. -Dinner – Athens by night.

alagmik
10
8 Days over of Peloponnese
We had the most remarkable family tour with Epos Travel over Christmas break in 2019. Not only everything was…
Read more